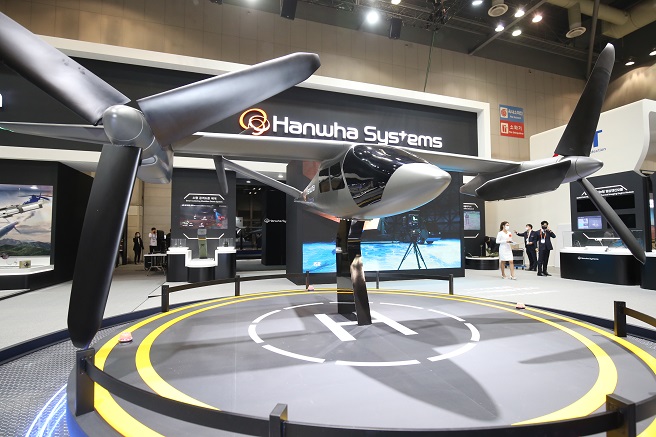 The mock-up of an electric vertical takeoff and landing aircraft called the Butterfly from Hanwha Systems Co. is on display at a defense industry fair held at KINTEX in Ilsan, north of Seoul, on Nov. 18, 2021, in this photo provided by the company.

SEOUL, June 2 (Korea Bizwire) — South Korea’s major defense companies are stepping into new businesses such as urban air mobility (UAM) and drones on the back of their long-accumulated expertise in military-purpose technologies.

Prior to this, the company launched the joint development of the air taxi Butterfly model in February in collaboration with the American personal air vehicle company Overair Inc.

LIG Nex1 Co., another major defense company, was recently selected by the government to carry out a national project to develop autonomous cargo drones powered by hydrogen fuel cells.

Thus far, LIG Nex1 has been engaged in the development of various military drones. By leveraging its expertise in this area, LIG plans to develop cargo drones that can be used for commercial purposes.

Korea Aerospace Industries Co., the country’s sole aircraft manufacturer, held a press conference in April in which it unveiled plans to launch a UAM venture.