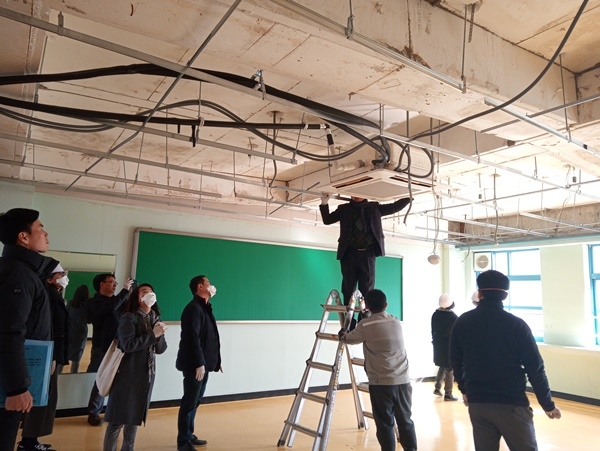 Officials work to remove asbestos from a classroom at a school in the southern city of Gwangju on Feb. 27, 2020, in this photo provided by the Gwangju Metropolitan Office of Education.

SEOUL, June 29 (Korea Bizwire) — The defense ministry said Monday it will eliminate asbestos from all military facilities by 2025 to ensure the health and safety of service members.

Around 11,600 military structures, including accommodations and sentry posts, were found to contain the carcinogenic material, according to an inspection last year.

Of them, 5,450 buildings linked directly to everyday lives, such as barracks and restaurants inside bases, will first be rid of asbestos by 2022, and the remainder, including warehouses and defunct posts, by 2025, according to the ministry.

“We’ve been working to rid military installations of the substance. In order to expedite those projects, we set the target year this time based upon the inspection results,” a ministry official said.

The ministry holds education sessions involving those in charge of the asbestos-containing facilities about how to safely manage them before the complete removal of asbestos, he added.

Asbestos exposure can cause health problems, such as asthma and cancer.

For health and safety reasons, South Korea has banned the use of asbestos, a once common substance for insulation, in new construction projects since the late 1990s, and has worked to remove asbestos from existing structures.