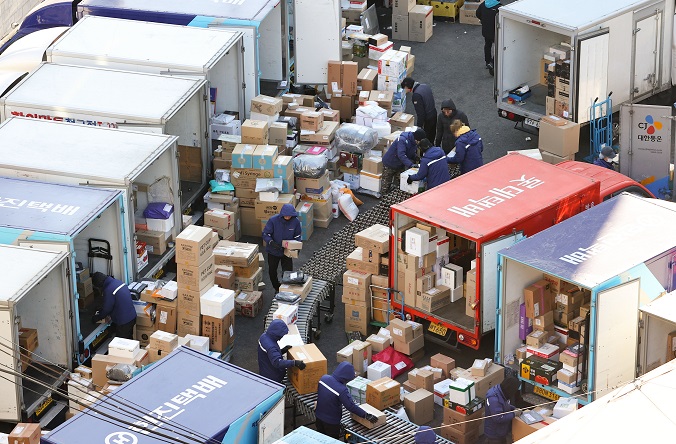 Workers sort parcels at a distribution center in Seoul on Jan. 19, 2021. (Yonhap)

SEOUL, Jan. 21 (Korea Bizwire) — Delivery workers reached an agreement with their employers on Thursday on preventing overwork, averting a strike ahead of next month’s Lunar New Year.

The agreement, which was mediated by the Ministry of Land, Infrastructure and Transport, stipulates that logistics firms bear the responsibility for sorting parcels before their delivery, a job couriers have blamed for their overwork.

It requires firms to come up with an automation plan and receive financial support from the National Assembly and government.

Until automation is complete, employers will assign workers to sorting or pay couriers extra for the additional workload.

The two sides had been in negotiations over a deal after 19 delivery workers died last year apparently due to overwork.

Under the new agreement, they will aim to cap the workload to 60 hours a week and 12 hours a day, with no deliveries after 9 p.m. except when unavoidable.

At a press conference later Thursday, unionized delivery workers said they will withdraw plans to strike ahead of the Feb. 12 Lunar New Year holiday, when demand for deliveries is expected to soar.

“To summarize the agreement, today is the day delivery workers are completely liberated after 28 years of sorting (parcels) for free,” Jin Kyeong-ho, a senior official of the national union of delivery workers, said.

The union said earlier that it expected some 5,500 of its members at five major logistics firms — including Hanjin Transportation Co., Lotte Global Logistics Co. and CJ Logistics Co. — to take part in the strike beginning next Wednesday.

Welcoming the agreement, the ruling Democratic Party said it will seek to mediate further deals between courier employers and employees to root out delivery workers’ overwork.

“I hope today’s agreement will open up a pathway to build a new social relationship that values solidarity and cooperation,” Rep. Jin Sung-joon said following the signing of the deal.

Jin said he hopes that “the latest agreement will lead to second and third rounds of agreement between the two parties.”