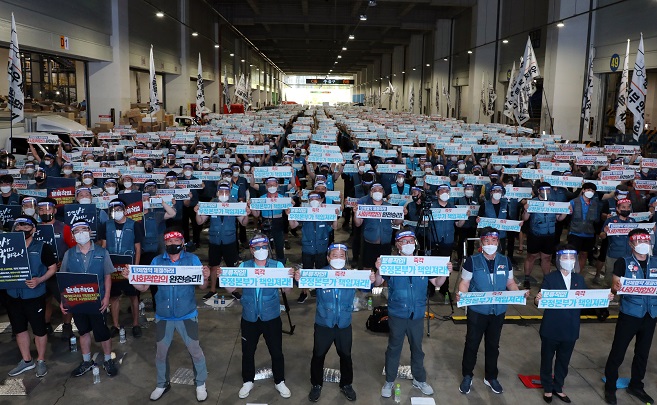 Members of the Parcel Delivery Workers’ Solidarity Union hold a rally at a distribution center in eastern Seoul on June 9, 2021. (Yonhap)

The Parcel Delivery Workers’ Solidarity Union said the indefinite walkout was approved by 4,910, or 92.3 percent, of 5,310 members who took part in a vote earlier in the day.

The union called the strike Tuesday after talks with the government and logistics firms on implementing a January deal fell through.

Under the agreement, the companies had agreed to provide extra workers to sort parcels and take other steps to ease the burden on couriers who have long complained of overwork from sorting parcels before delivery and doing so without additional pay.

“Logistics firms must take responsibility for sorting parcels, which has been free labor, and immediately implement the overwork prevention measures,” a union official said during a rally attended by some 2,000 members at a distribution center in eastern Seoul.

Since Monday, the union has refused to sort parcels and reported for work two hours late to deliver only those items that have already been sorted.

Union members who do not have the right to strike will continue that collective action, the union said.

“Logistics companies and the postal service have gained enormous benefits for decades by forcing delivery workers to sort parcels,” the union official said.

“By asking to delay the implementation of the overwork prevention measures by one year, they are saying they will continue to subject workers to long work hours and the risk of death from overwork,” he added. 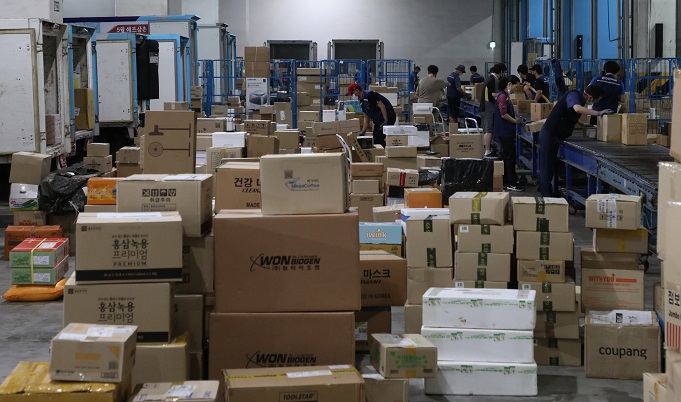 Workers sort parcels at a distribution center in eastern Seoul on June 9, 2021. (Yonhap)

The January deal was reached by the union, logistics companies and the government after 16 delivery workers died last year apparently due to overwork.

The agreement also calls on logistics firms to provide extra payment to workers for sorting parcels and to work to automate the job.

“We’re currently seeing business as usual, but we will be ready to respond to any changes,” a Lotte Global Logistics official said.

Despite the strike, the union said it plans to take part in the next round of the tripartite talks next Tuesday and Wednesday.