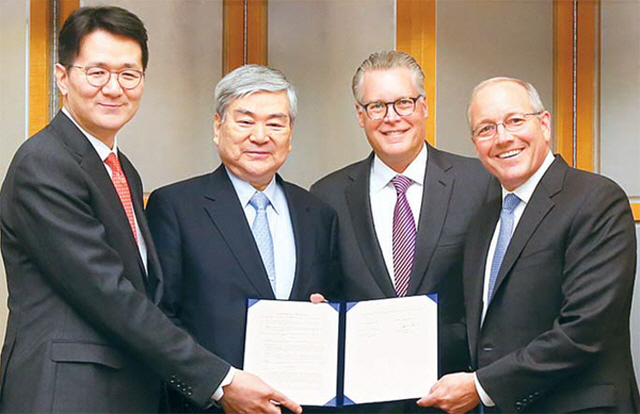 ATLANTA and SEOUL, Mar. 29 (Korea Bizwire) – Delta Air Lines (NYSE: DAL) and Korean Air have reached an agreement to deepen their historic partnership, with an expanded trans-Pacific network that will increase travel choices and boost competition between the U.S. and Asia.

The airlines signed a memorandum of understanding to implement a joint venture arrangement, which will offer customers access to the most comprehensive route network, industry-leading airline products, world-class airport facilities and a seamless customer experience.

Highlights of the agreement, subject to regulatory approvals, include:

“This agreement deepens our longstanding partnership with Korean Air and will provide the global access and seamless service our customers demand,” said Delta CEO Ed Bastian. “We look forward to providing customers of both carriers with industry-leading service between the U.S. and Asia.”

“This Joint Venture will benefit our customers by providing more convenient connection schedules and widen their opportunities in earning mileages,” said Korean Air’s Chairman and CEO, Yang Ho Cho. “With this agreement, we will reinforce Incheon airport’s position as a major international hub in North East Asia and support the growth of Korea’s aviation industry.”

Upon the signing of the final joint venture arrangement, Delta and Korean Air will work together to implement all aspects of the enhanced co-operation including expanded codesharing, frequent flyer programs and joint growth in the trans-Pacific market, with co-location at key hubs with seamless passenger and baggage transit experience.

Delta will be launching new nonstop service between Atlanta and Seoul in June 2017, a flight that complements Korean Air’s existing service, providing customers in the U.S. with greater access to destinations across Asia.

At the same time Korean Air will continue to expand its U.S. – Korea network in summer 2017 with the introduction of a third roundtrip between Los Angeles and Seoul, as well as a second flight between San Francisco and Seoul.

For further information about Delta Air Lines or Korean Air log onto delta.com or koreanair.com.

About Delta
Delta Air Lines serves more than 180 million customers each year. In 2017, Delta was named to Fortune’s top 50 Most Admired Companies in addition to being named the most admired airline for the sixth time in seven years. Additionally, Delta has ranked No.1 in the Business Travel News Annual Airline survey for an unprecedented six consecutive years. With an industry-leading global network, Delta and the Delta Connection carriers offer service to 323 destinations in 57 countries on six continents. Headquartered in Atlanta, Delta employs more than 80,000 employees worldwide and operates a mainline fleet of more than 800 aircraft. The airline is a founding member of the SkyTeam global alliance and participates in the industry’s leading transatlantic joint venture with Air France-KLM and Alitalia as well as a joint venture with Virgin Atlantic. Including its worldwide alliance partners, Delta offers customers more than 15,000 daily flights, with key hubs and markets including Amsterdam, Atlanta, Boston, Detroit, Los Angeles, Minneapolis/St. Paul, New York-JFK and LaGuardia, London-Heathrow, Paris-Charles de Gaulle, Salt Lake City, Seattle and Tokyo-Narita. Delta has invested billions of dollars in airport facilities, global products and services, and technology to enhance the customer experience in the air and on the ground. Additional information is available on the Delta News Hub, as well as delta.com, Twitter @DeltaNewsHub, Google.com/+Delta, and Facebook.com/delta.

About Korean Air
Korean Air, is one of the world’s top 20 airlines and carried more than 24 million passengers in 2015. Korean Air operates over 460 flights per day to 132 cities in 46 countries on six continents with a fleet of 175 aircraft including ten A380s.

The airline is a founding member of the Sky Team airline alliance, which together with its 20 members, offers its 665 million annual passengers a worldwide system of more than 17,343 daily flights covering 1,062 destinations in 177 countries.

Korean Air introduced the double-decker A380 aircraft to its fleet in 2011 and made the interior more spacious than any other airline, with just 407 seats spread across three classes, with the top deck dedicated to ‘Prestige’ business class. The design also features the world’s first onboard ‘Duty Free Showcase’ and three bar lounges.

More on Korean Air’s programs, routes, frequencies and partners is available at www.koreanair.com.