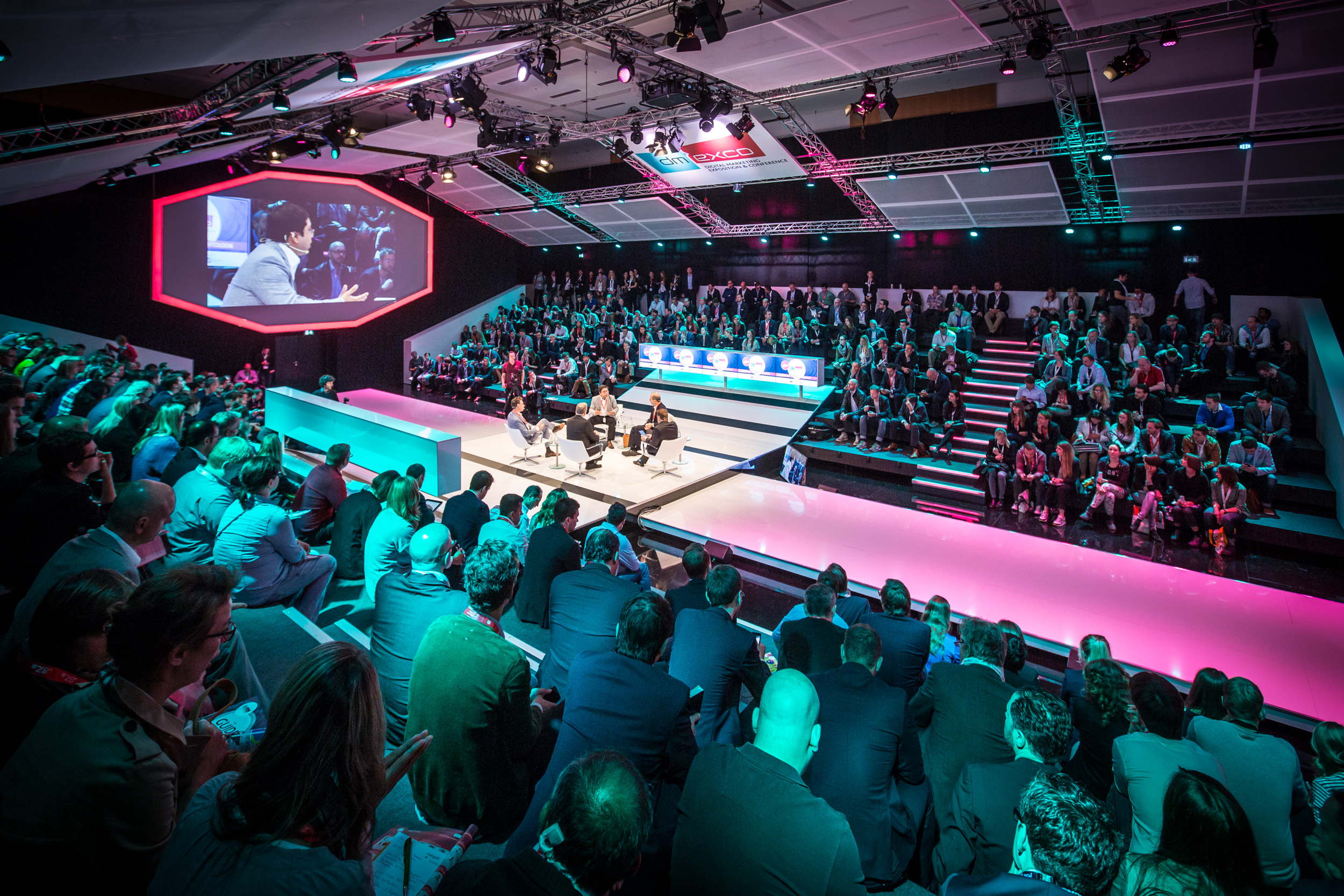 With a new exhibitor record of 881 companies from all over the world, a record amount of floor space measuring 75,000 square meters, the occupancy of four halls for the first time, and more than 500 top international speakers, dmexco is connecting all of the worlds of the digiconomy under this year’s slogan of “Bridging Worlds.” (image credit: dmexco)

COLOGNE, GERMANY,  Sept. 17 (Korea Bizwire) – Participants of dmexco 2015 are directly experiencing the global digital economy’s great dynamism and huge potential. With a new exhibitor record of 881 companies from all over the world, a record amount of floor space measuring 75,000 square meters, the occupancy of four halls for the first time, and more than 500 top international speakers, dmexco is connecting all of the worlds of the digiconomy under this year’s slogan of “Bridging Worlds.” Today and tomorrow, dmexco is helping visitors step into a new digital era with the global trade show’s two sections: an expo and a conference.

Starting today, dmexco 2015 is connecting current and future business worlds, new business models, disruptive technologies, and unusual ideas that are especially relevant to marketing, media, advertising, and consumer communications as we proceed into a new digital economy — the digiconomy. With 881 exhibitors and more than 500 top speakers from all over the world, the global trade show is bringing together the world’s leading thinkers and most important brands of the digital economy in its two areas: the expo and the conference. In line with this year’s slogan of “Bridging Worlds,” it thus offers its visitors helpful orientation and relevant information for achieving business success. The Circle of Online Marketers (OVK) of the German Association for the Digital Economy (BVDW) is showing this new digital era’s potential for digital business in the new OVK Online-Report and MAC Mobile-Report 2015/02, which have been presented at dmexco for the first time. According to the latest forecasts, the German market for digital display advertising will grow by 6.5 percent in 2015 and online and mobile advertising are expected to generate a total of about EUR 1.7 billion in revenues. Together with search term marketing, net advertising investments in digital display advertising (online and mobile) account for 27.6 percent of the net advertising pie. The online sector is therefore on a level with TV, and it continues to be ahead of newspapers and general-interest magazines. The OVK Online-Report and the MAC Mobile-Report 2015/02 will be available at www.bvdw.org and www.ovk.de beginning on September 21.

Expo: All of the important brands and players of the global digiconomy
Because the three previous dmexco halls no longer offer sufficient space, this year the organizers have opened a fourth hall for the first time. The new Hall 9 houses the Congress Hall and additional highlights such as the Broadcast Area with a TV studio and the Girl’s Lounge. More companies from the global digiconomy than ever before are presenting themselves on more than 75,000 square meters of exhibition space. All of the important brands and leading companies of the global economy are represented in Cologne in 2015, including Adobe, Amazon, Aol, Axel Springer, Criteo, Dentsu Aegis, eBay, Facebook, Mozilla/Firefox, Fox, Google, GroupM, IBM, Mediabrands, Medialink, Mediacom, Microsoft, Opera, Oracle, PayPal, Rakuten, Salesforce, SAP, Shazam, Spotify, Sprinklr, Starcom Mediavest, Teads, Twitter/Periscope, Vivaki, Xaxis, Yahoo, and Yandex. Especially among companies from the broadcasting sector, dmexco has noted a big increase in international participants, including Beet.tv, Discovery Channel, DMAX, TLC (The Learning Channel/USA), Eurosport, Huffington Post, Focus, Furious Minds, IP Deutschland (RTL), SevenOne Media (Pro7Sat1), and Sky. Global agency networks such as GroupM, Annalect Group, Dentsu Aegis, and IPG Mediabrands have their own stands at dmexco in addition to their presence along with their agency brands in the Agency Lounge. The global media agency networks represented at dmexco represent total financial resources of well over $200 billion.

The Start-up Village specially developed by dmexco is showcasing many new and interesting startups from Germany and abroad such as calovo, zoobax, Favendo, pixx.io, pag.es, Maloon, EYEVIDO, Jinni, and Sprinkle. In addition to exhibitors from Germany, international companies from countries such as the USA, the UK, and Israel are increasingly expressing interest in dmexco. Exhibitors from smaller markets such as the British Virgin Islands, Estonia, Finland, Malta, Ukraine, and Uruguay have also registered for the event. The dmexco national pavilions of Austria, Switzerland, and France have once again attracted great interest from exhibitors, and this year all of them have more than doubled their stand area. This year the Netherlands has a national pavilion for the first time to showcase selected leading Dutch digital agencies. The proportion of dmexco exhibitors from outside Germany is 30 percent.

Conference: All the trends and themes of the global digiconomy
The current opportunities and challenges of increasing digitization are being discussed by more than 500 top speakers on the six stages of the dmexco Conference. Pioneering thinkers and visionaries from the entire world of international marketing, media, and advertising are addressing all of the themes of the digiconomy in one place today and tomorrow in a program encompassing 200 hours of events. The dominant topic of the first day of dmexco is without doubt the digital transformation of the global economy, whose added value is based on different patterns of thought and often on disruptive models that offer an incredible level of new economic potential. Other central themes of the dmexco Conference include the Internet/Marketing of Things, Connected Life & Connected Home, Broadcasting & Video, Content Marketing & Creativity/Storytelling, Data, E-Commerce & Retail, Marketing Automation, Mobile & Mobility and Programmatic.

Christian Muche and Frank Schneider, dmexco: “dmexco 2015 connects people, brands, and media. Because the key players of the digital value chain come together here, we also see dmexco as a key bridge for usefully connecting the ever broadening economic sectors. This fact is not only reflected in this year’s slogan of “Bridging Worlds.” On the first day of dmexco, the participants have taken full advantage of the many opportunities to network at dmexco, learn from one another, understand, and successfully exploit the various opportunities and potentials of the digiconomy. And all of this is taking place at absolutely the top level! Nowhere else in the global digital economy will you find an event of this size, this quality, and with so many experts from all over the world!”

#dmexco 2015 links all the worlds of the global digiconomy www.dmexco.com

Participants of #dmexco 2015 are directly experiencing the global digital economy’s great dynamism and huge potential. With a new exhibitor record of 881 companies from all over the world, a record amount of floor space measuring 75,000 square meters, the occupancy of four halls for the first time, and more than 500 top international speakers, dmexco is connecting all of the worlds of the digiconomy under this year’s slogan of “Bridging Worlds.” Today and tomorrow, dmexco is helping visitors step into a new digital era with the global trade show’s two sections: an expo and a conference. www.dmexco.com

About #dmexco
dmexco is the leading international exposition and conference for the digital economy. As a unique combination of a trade fair and a conference, dmexco stands for innovative and forward-looking developments and trends at the center of a new digital economy: the digiconomy. With its focus on marketing, media, advertising, technology, and the Internet of Things, dmexco is the global platform for effective knowledge transfer and direct business transactions. In varied formats, it offers the largest selection of current economic trends, growth strategies, product innovations, and creative diversity. As a result, dmexco is the central showcase in the digital age for all forward-looking brand innovators and opinion leaders, advertising executives, marketing specialists, and startups, as well as all agency segments and media companies.

The Bundesverband Digitale Wirtschaft (German Association for the Digital Economy — BVDW) is the owner of the dmexco trademark. With special assistance from OVK — Circle of Online Marketers, the BVDW is also the conceptual and professional partner of the exposition/conference. Koelnmesse is the organizer of dmexco.

You’ll find complete information on dmexco 2015 (September 16 & 17 in Cologne), as well as photos, videos, and original audio at www.dmexco.de, www.facebook.com/dmexco, http://twitter.com/dmexco and www.youtube.com/dmexcovideo.