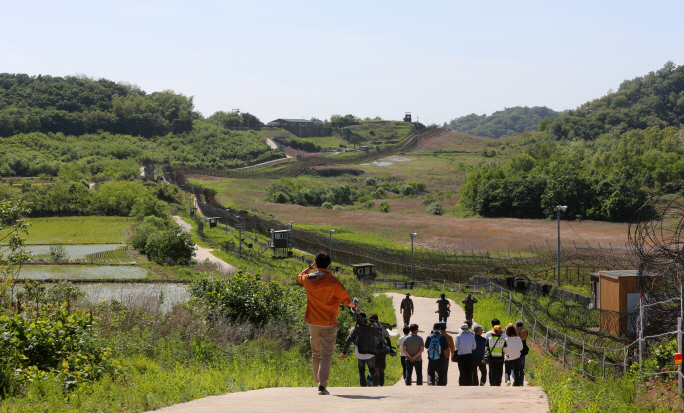 A group of tourists hiking the Cheorwon DMZ course. (Yonhap)

SEOUL, Sept. 16 (Korea Bizwire) — A special group of foreign students will walk a trail along the heavily fortified Demilitarized Zone this week during a government event designed to mark a historic inter-Korean summit a year earlier.

Thirteen university students from 12 countries outside of Korea, including the United States, Britain, Italy, Vietnam and Mexico, will go on a three-hour tour Tuesday on the Cheorwon stretch of the DMZ Peace Trail, according to the Ministry of Culture, Sports and Tourism on Monday.

Cheorwon, 88 kilometers north of Seoul, sits in the middle of the de facto land border bisecting the Korean Peninsula.

Under the event designed to promote ongoing peace efforts along the DMZ, the foreign students will walk on barbed wire-lined paths alongside the 4-kilometer-wide border and stop at major tourists spots.

Some of the major stops include a Korean War battleground where a historic excavation of the remains of fallen soldiers is currently under way, as well as a military guard post from which North Korean border villages could be overlooked.

The Cheorwon trail is one of the three DMZ routes South Korea opened up to civilian tourists this year as part of efforts for a permanent peace with North Korea, a project made possible thanks to the historic inter-Korean summit on Sept. 19 last year.

At the end of the summit in Pyongyang, President Moon Jae-in and North Korean leader Kim Jong-un signed the Pyongyang Declaration in recognition of their joint determination to end military hostility across the border and boost cooperation.

Since its opening in June, the Cheorwon trail has hosted some 2,245 selected Korean tourists.

“Most of the foreign participants applied for the Tuesday tour to better understand major Korean historic events, such as the Korean War and (the designation of) the DMZ,” a ministry official said.

“On the occasion of the tour, the ministry hopes more foreigners will be informed of the ongoing peace efforts that are under way following the Sept. 19 declaration.”