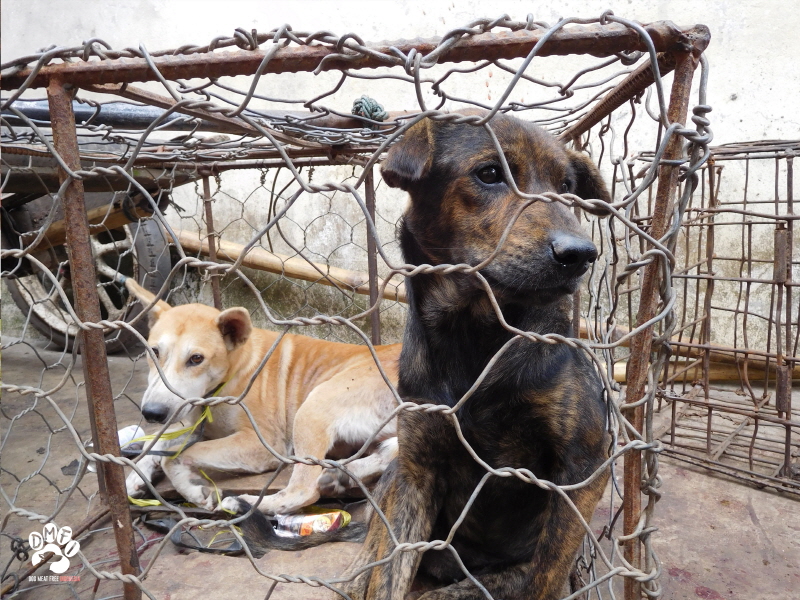 LONDON, Jan. 24 (Korea Bizwire) — The Indonesian government is being urged to shut down the country’s cruel live animal markets, where thousands of dogs and cats a week are bludgeoned in public, blowtorched whilst still alive, and butchered for eating.

Campaigners from the Dog Meat-Free Indonesia coalition filmed at two of the most notorious of Indonesia’s 200 live animal markets in North Sulawesi, “Tomohon Extreme Market” and Langowan Market, to expose the horrifying suffering routinely endured by animals. Live dogs and cats are seen trembling in cages as one by one they are beaten over the head, howling in pain.

Lola Webber, Dog Meat-Free Indonesia campaign coordinator, said: “It was like walking through hell. The dogs huddled together in cages, trembling with fear as they watched others being killed around them, waiting their turn. The sight of absolute terror in their eyes, the thumping of the club as they were bludgeoned, their screams of pain, and the smell of burning hair and flesh, were appalling and unforgettable.”

Thousands of dogs and cats are killed at the markets in North Sulawesi each week, mostly stolen pets or owned dogs. Some 80% are imported from other provinces, which is illegal under Indonesia’s anti-rabies law forbidding the movement of dogs across provincial borders. The movement of large numbers of animals of unknown disease status into densely-populated areas contravenes rabies elimination recommendations by leading authorities including the World Health Organization.

Indonesia relies heavily on tourists from around the world. More than 10 million tourists annually visit Indonesia, mainly from Singapore (1.6million), Malaysia (1.5million) Europe (1.5million) China (1.3million) and Australia (1million). Significant numbers also come from the UK, North America, India and New Zealand. The DMFI coalition is to join its call for an outright ban on this brutal trade.

Bobby Fernando of Animal Friends Jogja said: “Most Indonesians don’t eat dogs and cats, and this extreme cruelty tarnishes our global reputation. The tourist board’s slogan of a ‘Wonderful Indonesia’ rings hollow when you’ve gazed into the eyes of a dog spattered with blood and shaking with fear.”

Write to the Indonesian government and sign our petition at www.dogmeatfreeindonesia.org

A photo accompanying this announcement is available at http://www.globenewswire.com/NewsRoom/AttachmentNg/961d23ee-b24a-414c-82cb-007207d4ba49