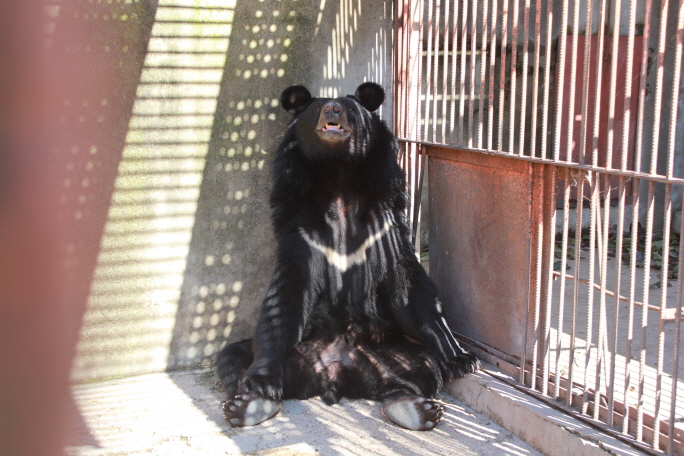 None of the farms offered a natural dirt ground for the bears. (image: Green Korea United)

SEOUL, June 24 (Korea Bizwire) — About 100 Asiatic black bears, a species in danger of extinction, were found confined to cages for illegal breeding and killed for meat.

Although Asiatic black bears are a species which requires special care for protection, some farms are engaged in illegal breeding and serving them for human consumption.

This is primarily due to the past government policy of encouraging bear farming as a way to boost the income level of rural villages.

In 1981, the government encouraged agricultural villages to import and breed bears and then export them to boost income.

Faced by strong public opinion that called for the protection of bears in danger of extinction, however, the government completely banned the import of bears in 1985.

According to the Korean Animal Welfare Association, the number of bears imported during the period stood at about 500, with the number of illegally-bred bears rising up to 1,400 in 2005.

Animal protection groups are calling for the government to shut down the bear breeding industry and protect the bears at safe facilities.

The Korean Animal Welfare Association recently sued an illegal bear farm in Gyeonggi Province for violation of the Wildlife Protection and Management Law and the Animal Protection Law.

The illegal bear farm was found to have kept about 100 Asiatic black bears in cages in the Yongin and Yeoju areas.

The Korean Animal Welfare Association claimed that the farm illegally bred Asiatic black bears without permission from the relevant authorities, and offered bear feet and meat for human consumption after extracting bear gallbladders.