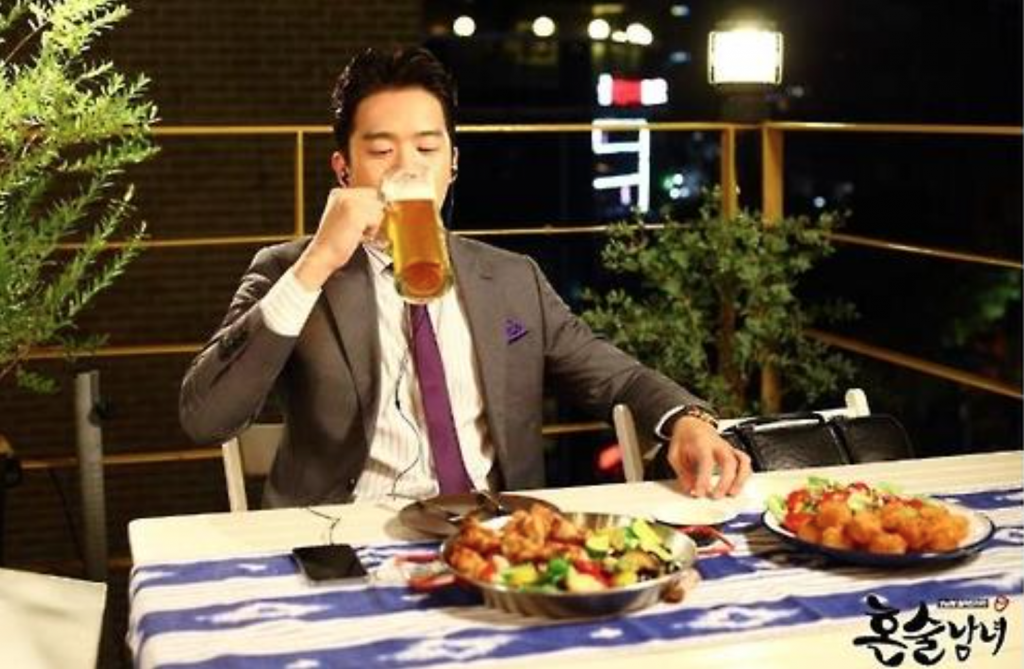 The drama’s appeal is likely in its story, given that the lead roles are played by somewhat “lightweight” actors, namely Ha Seok-jin and Park Ha-sun. (image: Yonhap)

“Drinking Solo,” a Monday-Tuesday series on cable channel tvN, rose two notches to sixth place on the Content Power Index (CPI) after scoring 226.3 points in the first week of this month.

The CPI, developed by entertainment company CJ E&M and media ratings company Nielsen Korea, measures the popularity of TV shows based on the number of views of related news stories, keyword searches and mentions in social media.

The drama’s appeal is likely in its story, given that the lead roles are played by somewhat “lightweight” actors, namely Ha Seok-jin and Park Ha-sun.

Ha plays Jin Jung-suk, a star lecturer at an academy in Seoul’s Noryangjin neighborhood. Noryangjin is known as the hub of people studying to enter the civil service. Exhausted by being among people, he takes to drinking alone every night, but never without a delectable set of food. In another corner of the neighborhood is Park Ha-na (Park), a lecturer far from attaining any recognition, who washes away her woes each night with a can of beer and photos of food Jin posts on his SNS accounts.

In their stories, viewers can probably relate to the universal feelings of loneliness, pain, loss and the daily grind.

Episodes 9 and 10, which aired the first week of the month, also showed Jin discovering his feelings for Park.

Topping the chart for the fifth week was the KBS period drama “Love in the Moonlight” with 273.1 points, followed by the SBS series “Moon Lovers: Scarlet Heart Ryeo” in second place with 251.9 points.

Climbing two places to third was the SBS rom-com “Jealousy Incarnate,” in which two men who were once friends compete for the love of a weathercaster played by Gong Hyo-jin.

Other programs in the top 10 included the KBS romance “On the Way to the Airport” and the MBC rom-com series “Shopaholic Louis.”