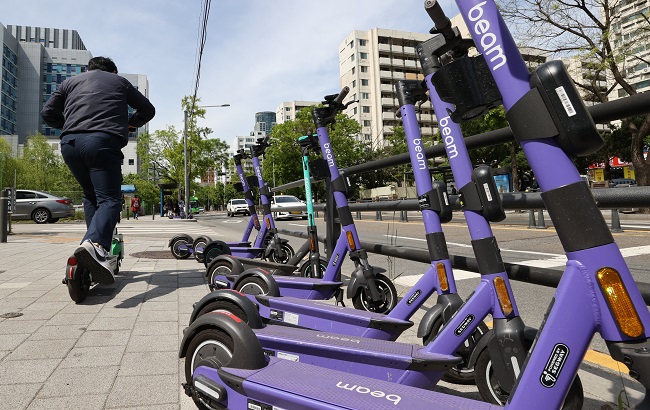 SEOUL, July 27 (Korea Bizwire) — Major personal mobility applications post warnings against drunk riding at night, but the number of drunken people who failed to overcome such temptation is not insignificant in South Korea.

In particular, as it’s difficult to hail a taxi at night in downtown areas in recent days, it’s not a rare event to see some drunken citizens riding public bicycles or electric kickboard-type personal mobility vehicles.

“I have never been caught by the police but I have suffered from a serious hand injury during drunken bicycling,” an office worker said.

As the number of drunken bicyclists and kickboard riders increases, the police are having trouble cracking down on them.

According to statistics from the National Police Agency, the number of drunken bicyclists caught by the police has been on an upward trend, rising from 538 cases in 2019 to 597 cases in 2020, 715 cases in 2021 and 526 cases from January to June of this year.

This year, there were 53 cases in January, 37 cases in February and 61 cases in March. However, after the social distancing rules were lifted, the number of such cases shot up to 66 in April, 197 in May and 112 in June.

The number of drunken drivers of personal mobility vehicles such as electric kickboards and two-wheeled vehicles who were caught by the police stood at 2,633 for the eight months from May to December 2021 when the police started compiling statistics.

This figure, however, rose to 3,201 cases in the first six months of this year.