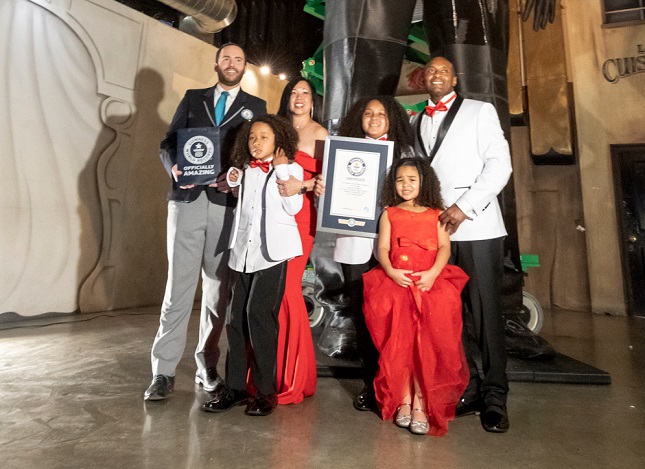 GARDENA, Calif., Feb. 24 (Korea Bizwire) — On Saturday, February 5, 2022, in Gardena, CA, Dr. Vinson Eugene Allen breaks a GUINNESS WORLD RECORDS title for the tallest 3D-printed sculpture of a human. The 19 ft 10 in (6.04m) tall, 1500lb (680.3886kg) sculpture took 12 weeks to create and five people to assemble. It was a massive sight for those in attendance at the unveiling ceremony. Dr. Allen broke the record set in the UK in October 2017. He is now the first American to hold the title.

The massive sculpture was assembled on-site and inspected by officials. Our entire team witnessed the growing excitement as the last section of the sculpture was placed. The emotional state of all who attended the unveiling, quickly realize they were witnessing history in the making. The Guinness World Records adjudicator spoke to Dr. Allen in private, disclosing that he is now the new record title holder of the tallest 3D-printed sculpture of a human. Dr. Connie Yu Allen hugged her husband along with their children in celebration of this achievement.

The Guinness World Records adjudicator announced to the crowd of onlookers that Dr. Allen had broken the 5-year record. Dr. Allen and his family took center stage as the roar of cheers and celebration started with proud Los Angeles residents. Dr. Vinson Eugene Allen and the Saint Vinson Eugene Allen Organization desire to show children all over the world, “Dream big and you can be big. Let nothing stop you.” The monumental sculpture is named “The Statue of Inspiration” for the legacy of Dr. Allen’s 20 years of unwavering commitment to those not only in his community, but abroad as well.

The final resting place of the statue has not yet been determined. Negotiations are underway to have the sculpture placed in a local community-based museum. Details will be released once confirmation of a designated location has been made.

Dr. Vinson Eugene Allen is the founder of Dusk to Dawn Urgent Care facilities, located throughout Southern California. For 20 years, Dr. Allen has provided culturally diverse doctors, physician assistants, and nurse practitioners for patients seeking medical professionals who represent their language and culture. Dr. Allen is connected to the people of each community. He is a brother to some and a son to the elderly. He is genuine, an inspiration to those who come in contact with him.