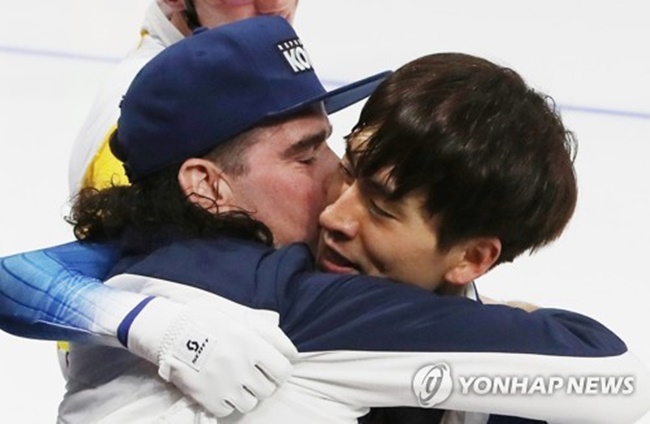 The Korea Skating Union (KSU) said de Jong, whose contract expired on Feb. 28, told the KSU via email that he’d decided not to sign another contract with South Korea. (Image: Yonhap)

The Korea Skating Union (KSU) said de Jong, whose contract expired on Feb. 28, told the KSU via email that he’d decided not to sign another contract with South Korea.

According to the KSU, de Jong said he was looking forward to rejoining the South Korean team in the future after gaining more coaching experience and that he was willing to assist South Korean skaters whenever they feel they need him.

De Jong, who counts the 10,000-meter gold medal at Torino 2006 among his four Olympic medals, joined the South Korean staff in April last year. He mostly worked with long-distance skaters, and helped South Korea grab seven medals during PyeongChang 2018, the most the country has won at a single Winter Olympics.

De Jong, 41, also became famous during the Olympics for his open display of affection for his skaters. In a blog he kept for a Dutch speed skating website during PyeongChang 2018, de Jong recounted an incident where he “jumped down 2.5 meters from the stands to cuddle the Koreans right away” when Lee Seung-hoon — who once competed against de Jong — won the gold in the men’s mass start and teammate Chung Jae-won finished eighth.

De Jong said he was pulled away by a couple of Dutch speed skating officials who didn’t see him coming, but said he couldn’t help the rush of emotions.

“I have built up a solid relationship with those skaters and staff and I wanted to celebrate that success with them,” he wrote. “It may sound crazy, but if you have worked together so closely, then as a Dutchman you can also be very happy with success for Korea.”

Separately, other members of the speed skating coaching staff have also told the KSU that they will not return.

Despite winning a record number of medals, the speedskating team was embroiled in a bullying scandal during the women’s team pursuit competition, and the government has launched a probe into a series of other controversies.