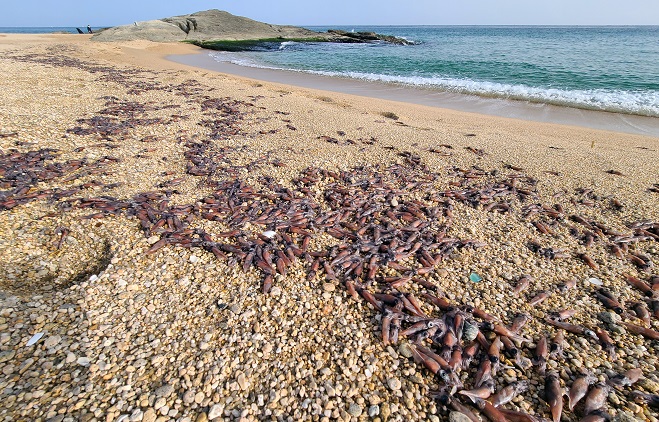 SEOUL, Jan. 14 (Korea Bizwire) — A huge number of tiny squids were found washed ashore and dead on an east coast beach in the northeastern province of Gangwon on Thursday morning, bewildering residents and sending some of them rushing to pick up the sea creatures.

According to residents of Goseong, 230 kilometers east of Seoul, and tourists visiting the coastal town, a vast amount of dead squids, each measuring 4 to 5 centimeters in length, were found scattered on a white sandy beach.

They were confirmed to be firefly squid, rather than squid babies. Firefly squid is a mysterious deep-sea creature known for living 200 to 600 meters below the water’s surface and growing to merely 7 cm.

Large numbers of firefly squid were found on a 500-meter section of the Goseong beach between Bongpo Port and Cheongganjeong Pavilion.

“I saw an enormous amount of small dead squids washed ashore on the beach while going for a walk in the morning. I’ve never seen something like this before,” said a Seoul resident who was vacationing at a condo resort near Cheongganjeong Pavilion.

A 75-year-old resident of Bongpo Port, surnamed Cho, and his wife were busy picking up the dead firefly squids on the beach.

“I’ve lived in Bongpo for about 40 years but this is my first time to witness this weird scene. I’ve seen a school of anchovies pushed out on the beach, but it’s the first time I’ve seen small squids pushed out,” Cho said.

His wife said she plans to make salted seafood with the tiny squids after cleaning them.

This is not the first time for groups of dead firefly squid spotted on the east coast. A similar phenomenon occurred on a beach in Sokcho, adjacent to Goseong, in December 2013.

Experts believe that the rare sight of firefly squid washed ashore may have been caused by the so-called upwelling phenomenon, in which deep, cold water rises rapidly toward the surface.

“Tiny squids found on the Goseong beach are not the Japanese flying squid mainly caught in the East Sea but firefly squid,” an official at the National Institute of Fisheries Science said.

“It is likely that the swarms of firefly squid perished, unable to withstand the rapid changes in water temperatures and air pressure caused by the upwelling phenomenon before being pushed to the beach,” the official said.