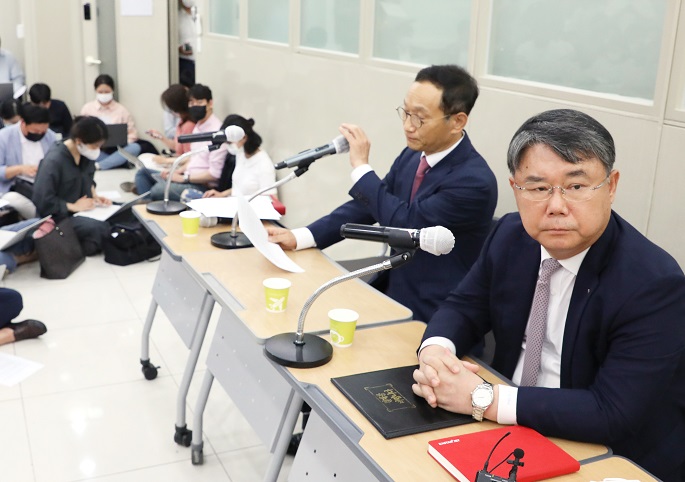 In this photo taken on June 29, 2020, Eastar Jet CEO Choi Jong-gu (R) listens to questions from a reporter about the company’s founding family’s stake donation plan to help Jeju Air’s takeover of Easter during a press conference held at its headquarters in Seoul. (Yonhap)

SEOUL, June 29 (Korea Bizwire) — Eastar Jet Co. said Monday its founding family members will donate their stake in Eastar in a move to bring Jeju Air Co.’s stalled takeover of the smaller budget carrier back on track amid concerns over potential rupture.

Rep. Lee Sang-jik of the ruling Democratic Party, Eastar Jet’s founder, and his family will put their entire 38.6 percent stake in the hands of the budget carrier, Eastar Jet President and Chief Executive Choi Jong-gu said in a press conference.

“We desperately call on Jeju Air to clarify whether it has a real intention to acquire Eastar Jet by tomorrow. And we also ask the government to extend a financial helping hand to the virus-hit airline industry before it goes bankrupt,” Choi said.

Rep. Lee’s son and daughter collectively own the 39.6 percent stake in Eastar Jet through its parent Eastar Holdings Co. The value of their Eastar stake reaches 41 billion won (US$34 million).

In March, Jeju Air signed a deal to acquire a controlling 51.17 percent stake in Eastar Jet from Eastar Holdings for 54.5 billion won as part of its expansion strategy despite the new coronavirus’ growing impact on the airline industry.

Jeju Air was expected to complete the deal by June 29 because the country’s biggest budget carrier said in April it will issue 10 billion won worth of convertible bonds on June 30, one of the prerequisites for the takeover.

Eastar Holdings was planning to purchase the bonds, which can be converted into Jeju Air equities.

But the bond issuance has been delayed, with the date to be set later according to an agreement from both sides.

Behind the delay were deep-running differences between the two sides over acquisition terms.

Eastar Jet said it suspended all of its flights and sent all of its 1,700 employees on “paid leave” in late March as Jeju Air said it will guarantee wages for them after the signing in the same month.

But Jeju Air changed its position in May with the worsening COVID-19 pandemic, according to Eastar Jet. 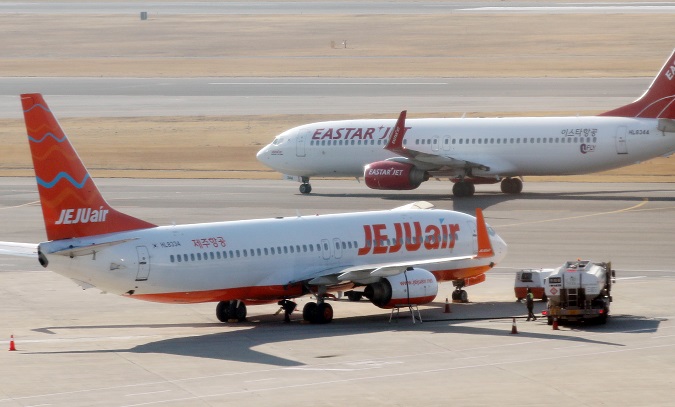 But Jeju Air dismissed Eastar Jet’s argument, claiming that the Eastar’s management made the decision to halt all flights and sent its employees home without paying wages.

Jeju Air said Eastar began to delay making payments to its partner companies at airports and oil suppliers in December. The subcontractors and refiners said that they won’t work with Eastar any longer in late March.

The tit-for-tat between the two low-cost carriers has recently brought Jeju Air’s acquisition of Eastar Jet to a halt.

To wrap up the deal, Jeju Air said it has to obtain approval from Vietnam and Thailand, which are still reviewing the proposed takeover.

Asked about a possible collapse of the deal, Jeju Air reiterated that it will proceed with the deal.

Jeju Air has said the acquisition will help it gain a bigger market share and strengthen the company’s competitiveness in global markets.