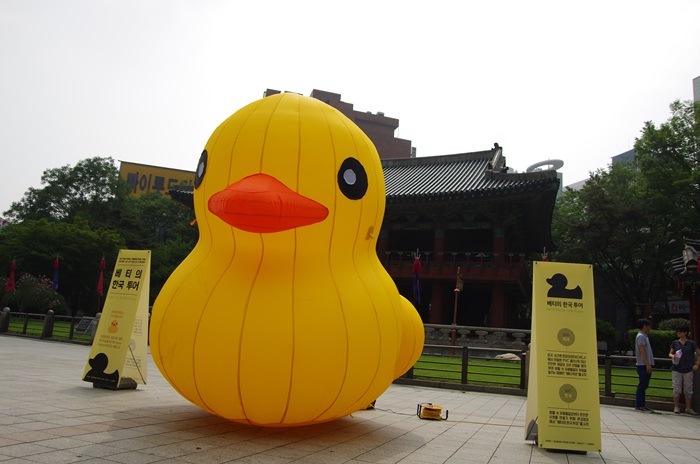 Unlike the famous Rubber Duck created by Dutch installation artist Florentijn Hofman, which was produced by one ton of polyvinyl chloride (PVC), which contains toxic material, the new duck is made of environmentally friendly materials. (image: Citizens’ Movement for Environmental Justice)

SEOUL, July 15 (Korea Bizwire) – An eco-friendly rubber duck that looks exactly like the one which was exhibited at Seokchon Lake in Seoul, gaining much popularity as an icon of “healing” last fall, is being displayed in downtown Seoul.

The Citizens’ Movement for Environmental Justice, a civil advocacy group, announced that it would display the duck balloon “Betty the Be Safe Ducky” in front of Bosingak, a bell pavilion in central Seoul until July 16. The duck balloon is made from natural textiles and is filled with air.

Unlike the famous Rubber Duck created by Dutch installation artist Florentijn Hofman, which was produced by one ton of polyvinyl chloride (PVC), which contains toxic material, the new duck is made of environmentally friendly materials.

To produce PVC, manufacturers use plasticizers like phthalate to make the plastic smoother, but phthalate plasticizer is a well-known toxic material that can cause infertility or a reduction in sperm count.

The United States’ Center for Health, Environment and Justice began displaying the Betty duck balloon as a symbol for PVC-free society, and this time it is being displayed in Seoul.

Stephen Lester, the science director at the center, said, “In 2008, Betty and our PVC campaign helped the United States to legislate a law prohibiting usage of phthalate in toys. We hope Korea sees a significant result through Betty.”