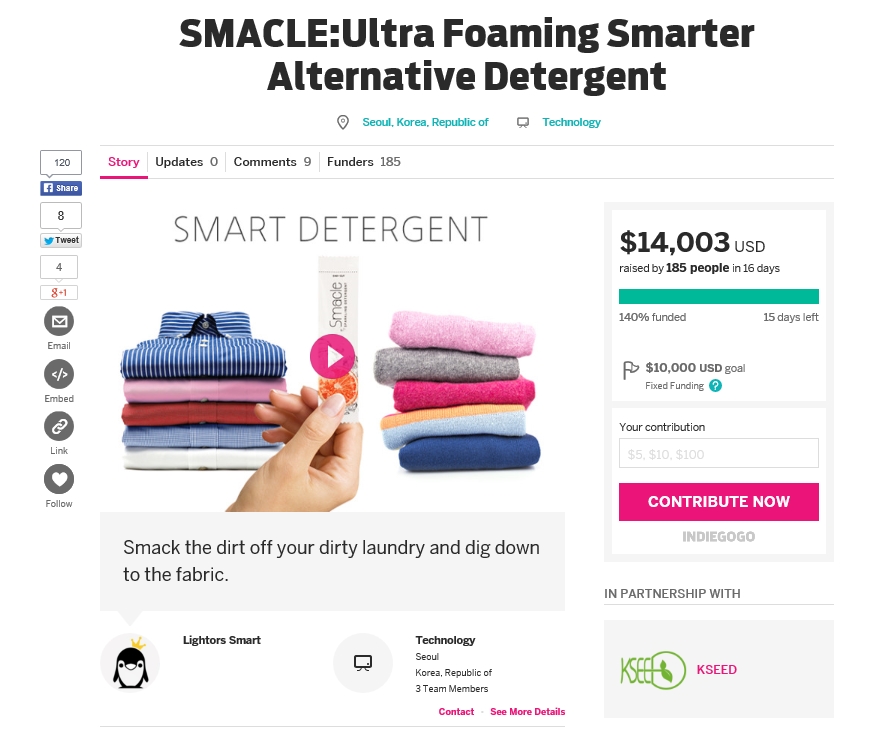 SMACLE was developed by two Korean engineers after 13 months of research. (image: Indiegogo)

SEOUL, May 14 (Korea Bizwire) — A laundry detergent that cleans clothes with micro bubbles and a small amount of surfactant has attracted US$ 60,000 in funding through two international crowdfunding sites, Kickstarter and Indiegogo.

JnK Science, the company behind the new type of detergent called SMACLE, said that it took in US$ 47,560 through Kickstarter and US$ 13,997 through Indiegogo since April 28.

SMACLE was developed by two Korean engineers after 13 months of research. JnK Science said that the detergent is an innovative substance, mainly composed of eco friendly ingredients such as orange, coconut, baking soda, citric acid and sodium carbonate peroxyhydrate, which generates micro bubbles.

SMACLE also leaves no residue on clothes, which often happens with excessive usage of conventional powder or liquid detergent. As SMACLE comes in one-time use packages, over use of the detergent can be also prevented.

The SMACLE campaigns will be live on the two crowd funding web sites (https://goo.gl/Obd0BE and https://goo.gl/wXhqp3) until May 27. SMACLE backers will be able to receive their detergent in October.