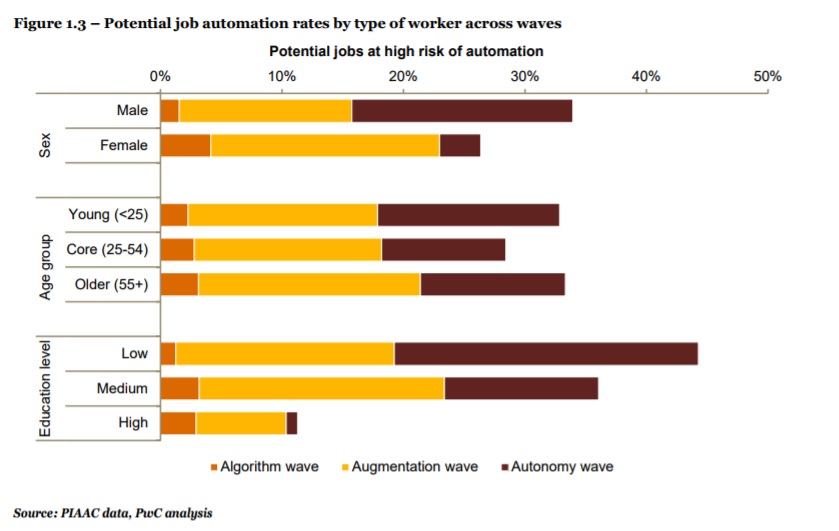 LONDON, Feb. 5 (Korea Bizwire) – The impacts of three overlapping waves of automation to the 2030s are examined in a new report published today by PwC: the algorithm wave, the augmentation wave and the autonomy wave.

The research analysed the tasks and skills involved in the jobs of over 200,000 workers across 29 countries in order to assess the potential impact of automation on workers in different industry sectors and of different genders, ages and education levels.

The study suggests that more women could initially be impacted by the rise of automation, whereas men are more likely to feel the effects in the third wave by the mid-2030s (see table below). This is due to the types of tasks that are more susceptible to automation and the current gender profiles of employment by sector.

The Algorithm wave is already well underway and involves automating structured data analysis and simple digital tasks, such as credit scoring. This wave of innovation could come to maturity by the early 2020s.

The Augmentation wave is also already underway but likely to come to full maturity later in the 2020s. The augmentation wave is focused on automation of repeatable tasks and exchanging information, as well as further developments of aerial drones, robots in warehouses and semi-autonomous vehicles.

In the third Autonomy wave, which could come to maturity by the mid-2030s, AI will increasingly be able to analyse data from multiple sources, make decisions and take physical actions with little or no human input. Fully autonomous driverless vehicles could roll out at scale across the economy in this phase, for example.

The table below summarises estimates of the proportion of jobs that could be impacted over these three waves and how this might vary for male and female workers.

Source: PwC estimates of median values across 29 countries based on analysis of OECD PIAAC data

John Hawksworth, chief economist at PwC and co-author of the study, commented that:

“Our estimates are based primarily on the technical feasibility of automation, so in practice the actual extent of automation may be less due to a variety of economic, legal, regulatory and organisational constraints. Just because something can be automated in theory does not mean it will be economically or politically viable in practice.

“Furthermore, other analysis we have done suggests that any job losses from automation are likely to be broadly offset in the long run by new jobs created as a result of the larger and wealthier economy made possible by these new technologies. We do not believe, contrary to some predictions, that automation will lead to mass technological unemployment by the 2030s any more than it has done in the decades since the digital revolution began.”

The estimated proportion of existing jobs with high potential automation rates by the mid-2030s varies significantly by country.

These estimates range from only around 20-25% in some East Asian and Nordic economies with relatively high average education levels, to over 40% in Eastern European economies where industrial production, which tends to be easier to automate, still accounts for a relatively high share of total employment.

Countries like the UK and the US, with services-dominated economies but also relatively long ‘tails’ of lower skilled workers, tend to have intermediate potential automation rates.

A chart accompanying this announcement is available at http://www.globenewswire.com/NewsRoom/AttachmentNg/35f1d7dc-d56f-40ed-a8cd-71bc988044e9

The estimated share of existing jobs with potential high rates of automation by the mid-2030s varies widely across industry sectors, from a median across countries of 52% for transportation and storage to just 8% for the education sector.

Transport stands out as a sector with particularly high longer term potential automation rates as driverless vehicles roll out at scale across economies, but this will be most evident in the third wave of autonomous automation. In the shorter term, sectors such as financial services could be more exposed as algorithms outperform humans in an ever wider range of tasks involving pure data analysis.

A chart accompanying this announcement is available at http://www.globenewswire.com/NewsRoom/AttachmentNg/a8d804c3-b5ee-4c00-ada3-9050b9cad971

Our analysis also highlights significant differences across types of workers and these will also vary across our three waves of automation (see chart below). The starkest results are those by education level, with much lower exposures on average for highly educated workers with graduate degrees or above, than for those with low to medium education levels.

In the long run, less well educated workers could be particularly exposed to automation, emphasising the importance of increased investment in lifelong learning and retraining.

More highly educated workers will typically have greater potential for adaptability to technological changes, for example in senior managerial roles that will still be needed to apply human judgement, as well as to design and supervise AI-based systems. Such workers should see their wages increase due to the productivity gains that these new technologies should bring.

Differences are less marked by age group, although some older workers could find it relatively harder to adapt and retrain than younger cohorts. This may apply particularly to less well-educated men as we move into our third wave of autonomous automation in areas like driverless cars and other manual labour that has a relatively high proportion of male workers at present. But female workers could be relatively harder hit in early waves of automation that apply, for example, to clerical roles.

A chart accompanying this announcement is available at http://www.globenewswire.com/NewsRoom/AttachmentNg/416fa618-0a4a-4773-bb3b-773eac092897

Automation rates also differ across countries because ways of working differ. In particular, workers in countries such as Singapore and South Korea with more stringent educational requirements could have greater protection against automation in the long run. This is also true (particularly in Europe) for countries with higher levels of education spending as a percentage of GDP.

“Our analysis highlights the need for increased public and private investment in education and skills to help people adapt to technological change throughout their careers. While increased training in digital skills and STEM subjects is one important element in this, it will also require retraining to help displaced workers to take jobs in services sectors where demand is high but automation is less easy due to the importance of social skills and the human touch.

“Governments, business, trade unions and other organisations all need to play their part here in helping people to adapt to these new technologies. In addition it is important that aggregate demand levels are kept high so as to facilitate the creation of new jobs. One obvious way to do this is through increased public and private infrastructure investment in areas like transport and housing.

“Possible loss of existing jobs should not lead countries to miss out on opportunities to lead the way in developing these new technologies. Unless a country blocks itself off from global trade and investment, which history shows would be extremely damaging economically in the long run, the technologies will still come to countries over time, so it is better to be at the forefront of this global race.”

“Our research shows that the impact from automation and AI will be felt in waves, with more routine and data tasks hit first. But just because businesses and people aren’t feeling the impacts right now, there is no excuse not to start planning for the future.

“AI technology is getting more sophisticated every day and businesses need to understand how, where and when their people are likely to be affected in the future. Those that understand the risks and opportunities can start upskilling their people and adapting their businesses, rather than simply reacting when it’s too late.”

About PwC
At PwC, our purpose is to build trust in society and solve important problems.  We’re a network of firms in 158 countries with more than 236,000 people who are committed to delivering quality in assurance, advisory and tax services. Find out more and tell us what matters to you by visiting us at www.pwc.com.