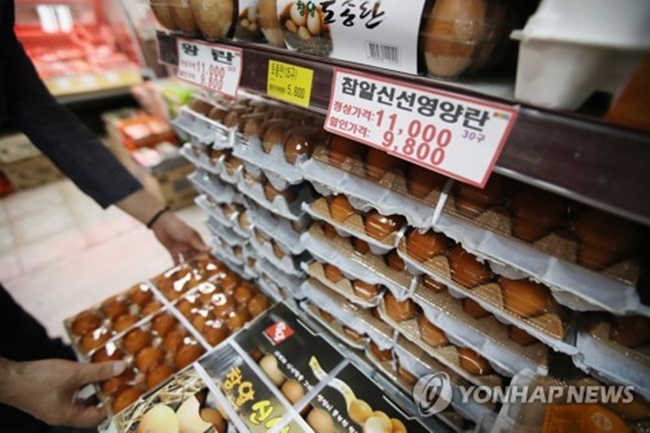 A tray containing 30 eggs is sold for 11,000 won (US$9.79) at an outlet in Seoul on June 9, 2017, as an unseasonal avian influenza hits the nation, causing the mass culling of chickens and ducks. (Image:Yonhap)

Some 2 million eggs imported by a local company will arrive in South Korea via ship sometime between next Tuesday and Wednesday, according to the Ministry of Agriculture, Food and Rural Affairs.

It is the first time that South Korea has imported eggs from the Southeast Asian country, following purchases made from six other nations — New Zealand, Australia, Canada, Denmark, Netherlands and Spain.

South Korea imported eggs from the United States for the first time in January, but stopped the process due to a bird flu breakout in the North American country.

The government has been dealing with rising egg prices since it suffered the worst avian influenza (AI) outbreak last winter, which led to the culling of more than 33 million birds. It has been grappling with another outbreak since early this month, with some 185,000 chickens having been killed so far.

Following the first shipment, the company is known to be planning to import some 2 to 2.3 million eggs every week.

The imports are expected to cost some 100 won (US$0.09) per egg, about a third of the average price of domestically produced eggs. A tray 30 Korean eggs are sold for around 10,000 won.

“The eggs imported from the U.S. in January failed to attract consumers as they lacked price competitiveness and were white in color, different from local brown eggs,” an industry official said.

“We will have to check consumer reaction to the Thai eggs.”