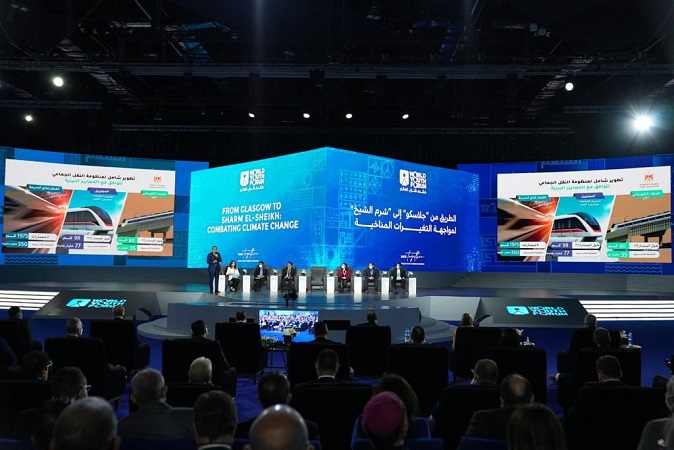 SHARM EL-SHEIKH, Egypt, Jan. 20 (Korea Bizwire) — The Egyptian President Abdel Fatah ElSisi attended the main session titled ’From Glasgow to Sharm El Sheikh: Combating Climate Change’ during the second-day activities of the World Youth Forum, which was held last week in the resort city of Sharm El Sheikh, under the slogan ’Back Together’. The session was attended by a host of speakers, topped by Egyptian Prime Minister Mostafa Madbouly, Director of Environment and Sustainable Development at the Egyptian Ministry of Foreign Affairs Mohamed Nasr, Strategic Advisor on Climate Change and Head of the Climate Promise at the UN Development Programme Cassie Flynn, Director of Climate Change and Environment at the C12 Consultants Akeel Hajat, and CEO and Co-Founder of Hawa Dawa Karim Tarraf.

Speaking at the session, Madbouly reviewed Egypt’s efforts in combating the negative impacts of climate change. He started his speech by praising the fourth edition of the forum, describing it as a platform for discussing critical human issues. The premier went on to say that climate change has undoubtedly become the world’s most critical issue on all levels, and the entire world needs to deal with it decisively and speedily to be able to overcome this challenge in the coming period. He pointed out that this issue should have been dealt with seriously when experts warned of its hazards 15 to 20 years ago. At that time, many considered such warnings as speculative or pessimistic, while the optimists thought that the effects of climate change would not be an issue during their lifetimes.

“During my 10-second speech at the session, more than 10,000 metric tons of greenhouse gases were released into the atmosphere, which are equivalent to the weight of 170,000 people,” the PM said, adding that the excessive carbon dioxide emissions have caused a rise in sea level and an increase in the average temperature of the Earth, in addition to other climatic phenomena. He added that 10 major disasters took place globally in 2021, causing losses of over $70 billion. He affirmed that the issue of climate change threatens the lives of all humans.

The PM noted that there are other issues affecting climate change, such as adaptation and insufficient funding. Therefore, he affirmed the importance of developing a follow-up and evaluation mechanism. Madbouly pointed out that the world incurred $3.6 trillion in losses in recent years as a result of climate change, and that the funds spent on addressing climate change will reach $500 billion annually.

Madbouly warned that nearly 352 million people are expected to suffer from extreme poverty as a result of climate change, and 216 million others will be forced to migrate domestically because of climate change, desertification and other issues that may be exacerbated due to climate change. Therefore, the PM called for implementing the 2015 Paris Agreement, pointing out that UN Secretary-General Antonio Guterres has stressed the importance of applying this agreement as well. However, the premier indicated that the Paris Agreement alone is not enough, so the COP27 conference, to be hosted by Egypt later this year, will be of great importance because it will tackle ways to develop legal frameworks to reduce emissions.

The prime minister went on to say that global disasters took place in 2021, causing losses worth $170 billion. He added that the death toll from high temperature has recently increased to 300,000 deaths annually, and it is expected to increase to 1 million deaths in the near future.

Speaking about efforts taken by Egypt to combat climate change, the prime minister made it clear that Egypt is one of the countries most vulnerable to the negative impacts of climate change, although its responsibility for this issue is very limited. He affirmed that Egypt has the largest resources of new and renewable energy, and it will soon be one of the five largest countries producing renewable energy in the Middle East and Africa.

The PM talked about a project to develop Egypt’s lakes, which had been neglected for hundreds of years, causing their sizes to shrink. He also spoke of a project to revamp Lake Manzala at a cost of $2 billion, as well as the Benban Solar Park, which is one of the best projects globally. The premier reviewed another project to deliver natural gas to all homes across the nation to replace traditional energy.”During the 2022 UN Climate Change Conference, more commonly referred to as COP27, which will be held at the end of this year in Sharm El Sheikh, Egypt will focus on the impact of climate change on the African continent,” the PM pointed out, adding that African countries will make their requests at the conference to keep pace with the latest developments in this field. He indicated that Egypt also aims to develop its research centers, distribute specialized awards for green projects, and support the role of youth in facing climate change. He stressed that all change comes from unconventional ideas, and Egypt encourages young people to develop and implement innovative solutions.

The World Youth Forum (WYF) is an annual event that takes place in the City of Sharm El-Sheikh in South Sinai, under the auspices of President Abdel Fattah AlSisi. Three editions of WYF were launched over the three years 2017, 2018, and 2019. WYF aims to bring together young people from across the world, enabling them to engage in discussions on development issues, and send a message of peace from Egypt to the world. The UN Committee on Social Development has adopted WYF, with its past three editions, as an international platform to discuss youth issues and causes.