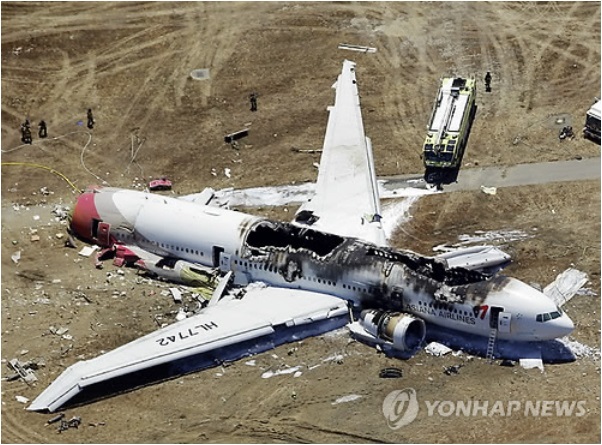 Investigators from the U.S. National Transportation Safety Board concluded that the main cause of the accident was an error on the part of the pilot, who had overly relied on the cockpit’s automated systems, among other faults. (image: Yonhap)

SEOUL, Sept. 17 (Korea Bizwire) – It has been revealed that among the 12 cabin crew members who were on board the Asiana Airlines flight that crash-landed at the San Francisco Airport, eight have filed lawsuits for compensation against the airline and the plane’s manufacturer, Boeing.

In July 2013, a Boeing 777 jet operated by the South Korean airline crashed and burst into flames at the San Francisco International Airport, killing three passengers and injuring more than 180 people who were on board.

Investigators from the U.S. National Transportation Safety Board concluded that the main cause of the accident was an error on the part of the pilot, who had overly relied on the cockpit’s automated systems, among other faults.

One of the crew members, who had her backbone broken in the accident due to the malfunction of an emergency exit slide, filed a suit in January 2014, followed by other five flight attendants in December and the other two in June of this year.

Among the other four who did not pursue legal recourse, one left the company, and another is currently on a leave of absence. The other two are active duty employees.

Northern California federal court plans to deal with the lawsuits and other related cases together.

According to the Montreal Convention on international flights, any party needs to file a lawsuit within two years of any accidents, so most passengers filed related lawsuits regardless of their respective negotiations for compensation.

If negotiations were to go awry and the victims missed the deadline, they could be left without compensation, based on the treaty.

In June, 27 Korean, 25 Chinese and one Indian national who resides in Korea filed a class action lawsuit against Asiana over the accident in a Seoul court.

Asiana has said it is sincerely committed to the talks with the victims.