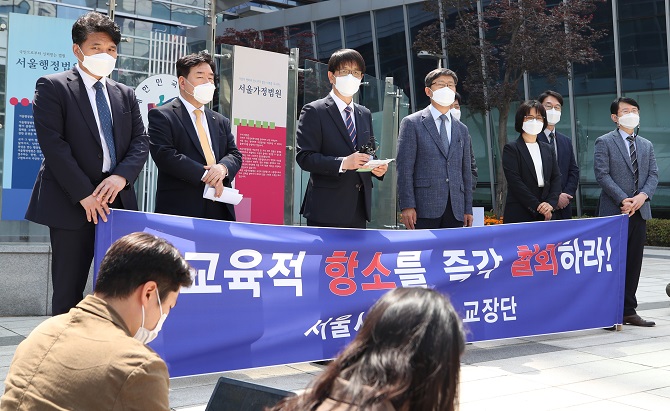 Principals of autonomous private high schools in Seoul hold a press conference outside the Seoul Administrative Court on May 28, 2021, demanding that the Seoul Metropolitan Office of Education drop its appeal against the court’s decision to extend the schools’ licenses. (Yonhap)

SEOUL, July 11 (Korea Bizwire) — Elite high schools will be able to keep their status for the time being after the courts ruled 10-0 against the education authorities’ decision to cancel their licenses.

On Thursday, Dongsan Christian High School in Ansan, 42 kilometers south of Seoul, became the tenth and last “autonomous private high school” to win against the education authorities in the first round of an ongoing legal battle for legitimacy.

“I hope the Gyeonggi Province Office of Education will humbly accept the outcome and not raise any further issues,” Cho Kyu-cheol, the principal of Dongsan Christian High School said.

“Spending administrative power on lawsuits is not helpful for educational development.”

Dongsan and nine other autonomous private high schools in Seoul and Busan sued their respective education offices in 2019, seeking a reversal of their decision to cancel the schools’ licenses based on a periodical performance review that year.

The decision to revoke the licenses was later endorsed by the Ministry of Education.

As in the cases of the previous nine schools, however, the Suwon District Court ruled Thursday that the Gyeonggi education office had abused its discretionary power by changing the evaluation criteria and informing the school late in the 2014-2019 evaluation period, when it should have done so in advance.

Dongsan scored 8 points short of the necessary 70 to pass the new performance review.

But the legal battle continues, as the education offices have appealed or plan to appeal the courts’ decisions.

Moreover, the government has said it will push ahead with its plan to convert all autonomous private, foreign language and international high schools into general high schools in March 2025.

To enable that, the government has revised an enforcement ordinance of the Elementary and Secondary Education Act.

As a countermeasure, a group of schools filed a petition with the Constitutional Court last year, claiming that the government’s plan to convert the autonomous private high schools into general high schools is unconstitutional.

The court’s decision is not expected until next year. 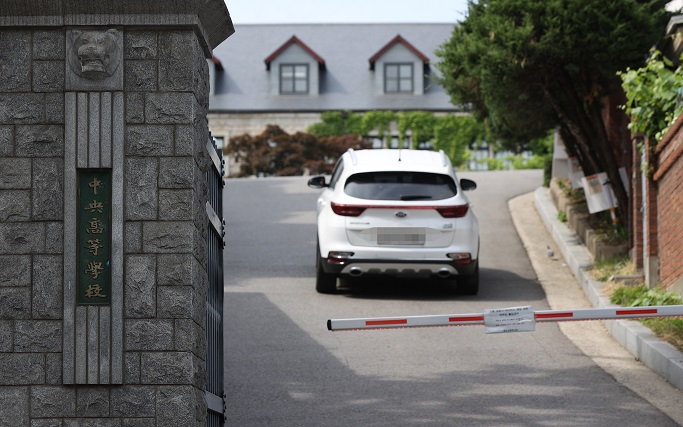 This file photo shows Choong Ang High School, one of eight autonomous private high schools in Seoul that are involved in a legal dispute with the education authorities over keeping their status. (Yonhap)

The Moon Jae-in administration believes the elite schools have created a “stratified” education system that has increased learning gaps between different social groups.

Moon ran his 2017 presidential election campaign on a promise to convert them into general high schools.

Critics of the government’s policy argue that abolishing the elite school system will hurt diversity and the nurturing of talent at schools and only add confusion and inconsistency to an already competitive educational environment.

They say abolishing the elite schools will achieve nothing unless it is accompanied by steps to raise the quality of education at general high schools.

“The (Moon) administration, the education office and the Ministry of Education should apologize and take responsibility even now,” the Korean Federation of Teachers’ Associations said after Thursday’s ruling.

An association of private elementary, middle and high schools also accused policymakers of “naeronambul” — a portmanteau that roughly translates as “If I do it, it’s called romance. If others do it, it’s called an illicit affair” — citing the fact that many of them have sent their own children to the elite schools.

“It is nothing more than a populist policy that lacks serious consideration of the country’s future,” it said in a statement.

Autonomous private high schools were first introduced as a pilot program in 2002 and then formally adopted and expanded under the Lee Myung-bak government in 2010.

The conservative administration gave the schools greater autonomy than general high schools in decisions on admissions, financing and curricula, with the intention of salvaging a “crumbling” public education system.

As a result, autonomous private high schools were allowed to charge up to three times higher tuition fees than general schools and many of them focused on teaching Korean, English and math, which are core subjects for college entrance exams.

The Ministry of Education refrained from issuing a statement Thursday, saying it first needed to study the ruling.

The Gyeonggi Province Office of Education slammed the ruling as “giving a pardon to the unfair educational situation and stratified college entrance system.”

“We will reveal until the end the legitimacy of our assessment of autonomous private high schools and the decisions resulting from it,” the office said.