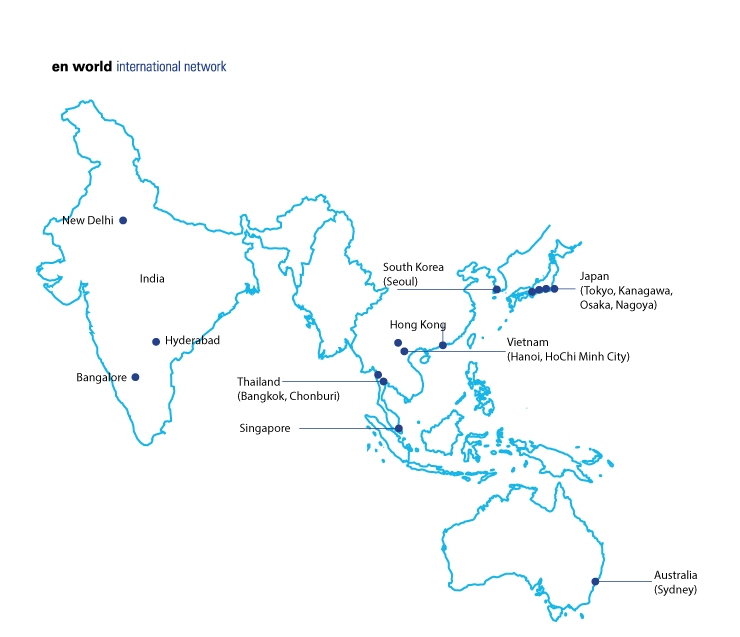 “We believe India is a growth market that will see increased demand for mid-level and higher management and specialist personnel, which is our specialty.” (image: enworld.com)

New Era, established in 2000, is a leading executive search firm in India with a strong reputation in diverse industry verticals such as Information Technology Enabled Service, Banking, Financial services and Insurance, Fast-moving consumer goods and Pharmaceuticals. They are well known for timely delivery, experienced professionals and offering varied recruitment solutions to meet client needs. In addition to their company headquarters in New Delhi, New Era also has offices in Bangalore and Hyderabad.

With successful introductions of some 12,000 candidates in 2,500 companies in the Asia Pacific region, en world specializes in cross-border and multilingual recruitment solutions and is able to meet the stringent demands of both clients and candidates whose needs extend beyond just local markets.

It’s well known that India has huge growth based on GDP and working population, New Era adds momentum to source and attract highly skilled talents from India then in collaboration with other offices, New Era will facilitate the efficient migration of talent to Japan, Australia, Singapore, Korea, Hong Kong, Thailand and Vietnam and vice versa.

Craig Saphin, President of en world group stated, “With the launch of services in India, this represents the eighth country in the Asia Pacific region in which we now operate. We believe India is a growth market that will see increased demand for mid-level and higher management and specialist personnel, which is our specialty. en world is proud to be able to offer seamless services through our network that spans throughout all of Asia.”

Arvind Sehgal, CEO of New Era stated, “This association between New Era and en world will be creating a synergistic effect. Existing en world customers can maximize their strength to India market with New Era’s strong presence and influence. New Era is excited about the opportunity to introduce the best talent and the best working environments from across the APAC region.”

en world provides recruitment services, focused on mid-career professionals, to global corporations. Prior to becoming en world Japan, the company was founded as Wall Street Associates Inc. in 1999, when we began as a recruitment agent specializing in the finance industry. Since its establishment, the company has supported the hiring activities of numerous global corporations. Looking to expand operations, in 2010 Wall Street Associates became a member of the en-japan group, a leader in the field of internet recruitment advertisements. In April 2012, the company changed its business name from Wall Street Associations to en world Japan K.K.. Today, the company has offices in Japan (Tokyo, Kanagawa, Nagoya, Kansai region) as well as Singapore, Hong Kong, South Korea, Australia (operating as Calibrate Recruitment), Vietnam (operated as Navigos Search), and Thailand (operating as Top Talent Asia). http://enworld.com/