“The swamp near Gimpo International Airport is home to approximately 30 important species of plants and animals, and should be protected by law. It also absorbs fine dust from China. The planned golf course in the swamp should be cancelled.”

“On February 11 and 12, there will be public hearings at Gangseo-gu and Bucheon city respectively to gather opinions on the golf course projects. The government should not only cancel the project due to health and environmental concerns and consideration for future generations, but should also come up with plans to preserve the swamp.” 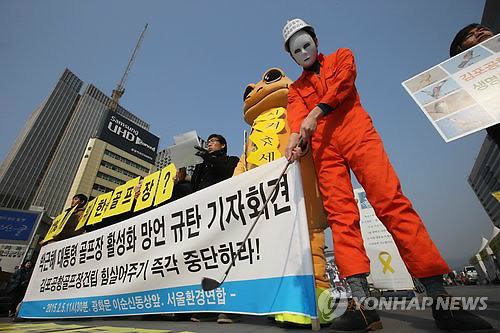 On February 5, the environmental advocacy group held a press conference at Gwanghwamun Square in downtown Seoul, to condemn the directive and to ask the government to abandon the plan to set up a 27-hole golf course. (image: Yonhap)

SEOUL, Feb. 6 (Korea Bizwire) – As the government picks up measures to revitalize the golf industry following President Park Geun-hye’s cue on February 4, the Korean Federation for Environment Movements has asked the government to cancel a golf course project.

On February 5, the environmental advocacy group held a press conference at Gwanghwamun Square in downtown Seoul, to condemn the directive and to ask the government to abandon the plan to set up a 27-hole golf course and sports facilities for citizens on the site of the 1,277 sq. km swamp near Gimpo International Airport.

The Korean Airports Corporation (KAC) came up with the plan to make use of unused land under the air route to the runways, and to reduce bird strikes.

However, the environment group regards the plan as a ploy to sell land that the state company bought at a dirt-cheap price due to disruption caused by aircraft noise.

The KAC aroused suspicion about its true intentions by reducing the environment impact cases in its own environmental assessment of the project. In the document, it wrote that area in question is inhabited by 39 species of wild birds, including five that are protected by law. However, according to the statement from the civic groups, the area is home to 96 species, including 18 that are legally protected.

In addition, the environment group argued that since golf courses are designated as bird attracting facilities by the government, developing a golf course to reduce bird strikes was illogical.