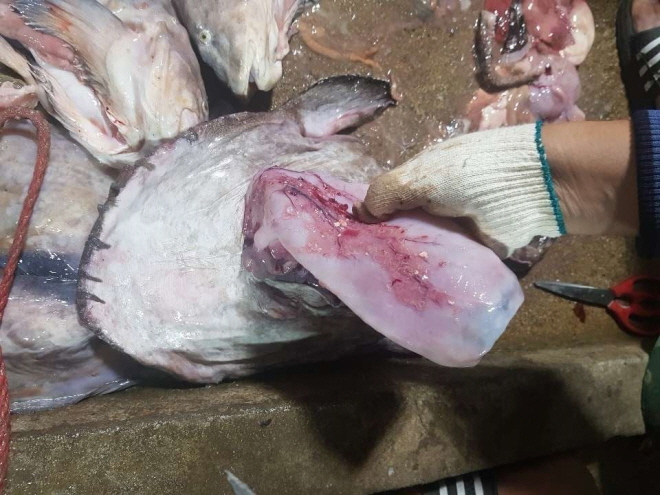 Environment organizations called the discovery a “warning from the ocean,” stressing the need for “government-led measures to tackle plastic waste.”

The Korean Federation for Environmental Movements’ (KFEM) North Jeolla Branch announced on Friday that a fisherman had caught a 50cm-long anglerfish while collecting crabs by the coast of Buan.

After coming back to the harbor to process the anglerfish, the fisherman found a 500㎖ plastic water bottle inside the fish’s stomach, and reported it to Lee In-gyu, a member of KFEM.

“Anglerfish are known to devour their prey whole, so it is common for fishermen to first look into their stomach when they process the fish,” said Lee.

“The fisherman probably expected a squid or some other fish, not a plastic bottle.”

There were previous cases in which small plastic fragments or ball pens were found in the stomachs of anglerfish, but finding a whole plastic bottle was a first, according to Lee.

The KFEM emphasized the seriousness of the issue as it called for fundamental measures to deal with sea waste.

“While fishermen can work together to clean the coastline, it gets very difficult when it comes to collecting plastic waste at sea,” said Lee Jeong-hyun, the secretary general of the KFEM.

“We all need to cut down on our use of disposable products, and the government should implement measures to tackle plastic waste.”