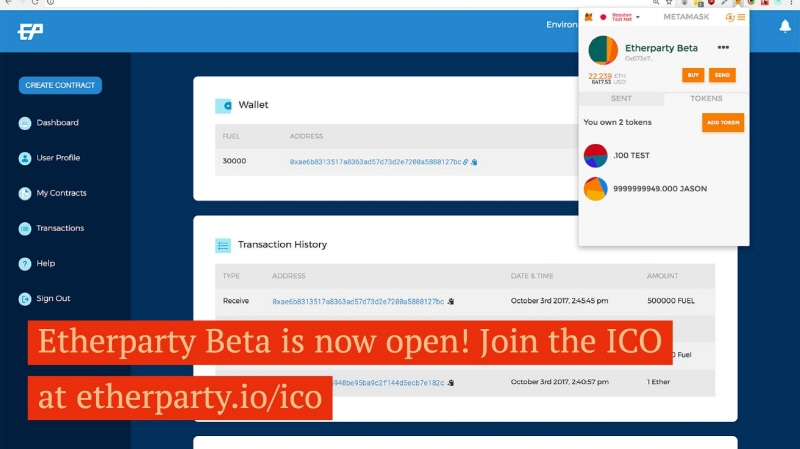 A photo accompanying this announcement is available at http://www.globenewswire.com/NewsRoom/AttachmentNg/049fd0d2-e0e0-43bb-98d2-31fef7818bcd

The beta will be a free access trial with smart contracts launching on the Ethereum Ropsten Testnet. Beta testers will receive an invitation via email to log-in. Users will be given test-versions of the in-app currency FUEL, and be able to experience the end-to-end process of creating and deploying a Smart Contract on the Ethereum network.

The intent of the Beta program is to allow users to select features on a contract, from templates composed of fully tested code that has a history of use on the platform – to ensure bug-free smart contracts are always available to launch.

“Etherparty smart contracts will save developers time, cost and also reduce the corporate risk by deploying tested contracts with a proven track record,” said Etherparty Architect Brian Onn. “User feedback will be reviewed and incorporated into the platform for the next phase of development.”

Etherparty will enable anyone to create, publish, and integrate smart contracts into their business and application. The platform’s clean interface and ease-of-use will open the door to greater adoption of smart contract technology and the benefits around self-executing digital agreements.

“The cost of creating a Smart Contract is reduced significantly with Etherparty,” comments Lisa Cheng, Founder of the project. “Users will be able to see that they can launch a variety of Smart Contracts in minutes which would normally take months to create.”

The full version of the Etherparty platform will be released in 2018. Use of the platform’s in-app currency, FUEL, will be required to purchase and make use of any smart contract or tool available on the platform.

FUEL tokens are currently being sold via crowdsale for a discount ahead of the full version release. The Etherparty crowdsale runs until Oct. 29, unless tokens sellout prior.

About Etherparty
Etherparty is a contract wizard that removes the complexity of creating, managing and executing smart contracts on multiple blockchains. The platform enables users with minimal knowledge of smart contract programming to create an enforceable, self-executing digital agreement for all types of transactions.