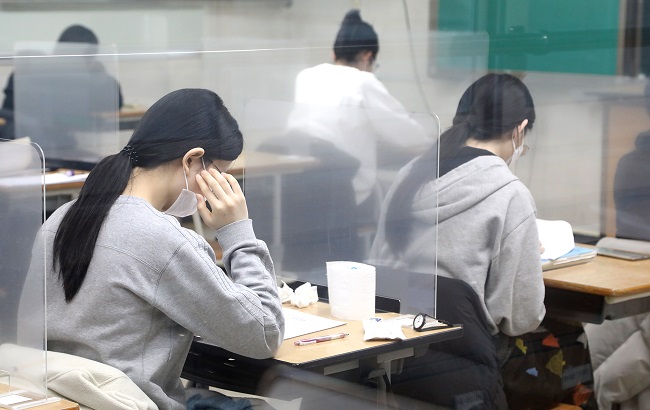 This photo, provided by the Daejeon Metropolitan Office of Education, shows students preparing to take the College Scholastic Ability Test at a high school in Daejeon, 164 kilometers south of Seoul, on Dec. 3, 2020.

SEOUL, Dec. 29 (Korea Bizwire) — Students and their parents who recently took the annual national college entrance exam have sued the Minister of Education after an early bell reportedly sabotaged their exam.

Students from a women’s high school in Seoul’s Gangseo District and their parents recently sued eight people including Education Minister Yoo Eun-hye, Superintendent Cho Hee-yeon of the Seoul Metropolitan Office of Education and field supervisors for dereliction of duty.

The school’s bell rang two to three minutes earlier than scheduled during a selected course examination on Dec. 3.

The supervisors, realizing the error, gave back the test papers they had initially collected to allow a couple more minutes of time.

The students claimed that the confusion impacted their test results, pointing out that distribution and collection of test papers, as well as the duration of extra time, differed by each test site.

“The school staff in charge of broadcasting seem to have been responsible for the accident after inadvertently touching the mouse’s scroll wheel,” said the Seoul Gangseo Yangcheon District Office of Education.