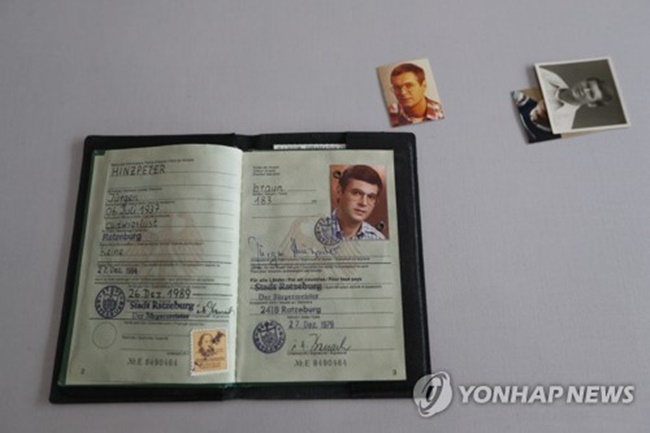 This photo, taken on Aug. 21, 2017, shows the passport of late German journalist Jurgen Hinzpeter during an exhibition on him in the southwestern city of Gwangju. (Image: Yonhap)

GWANGJU, Aug. 21 (Korea Bizwire) – An exhibition on late German journalist Jurgen Hinzpeter opened on Monday in the southwestern city of Gwangju as the city paid tribute in recognition of his efforts to report a 1980 democratic uprising to the world.

The exhibition, held at the Gwangju City Hall, is timed with the box-office hit “A Taxi Driver,” which depicts the story of a cabbie who happened to take the German reporter to the center of the pro-democracy movement in the South Korean city in May 1980. In the May 18 Gwangju Uprising, hundreds of citizens in the region were killed during protests against the then-military junta of Gen. Chun Doo-hwan.

Helped by the taxi driver named Man-seop, Hinzpeter became the first western reporter to send out footage of the bloodshed during the crackdown on the movement to the world.

Displayed are videos and photos on the pro-democratic movement, along with a pair of glasses worn by Hinzpeter and his passport, made available by his family.

The exhibition, which will run through Sept. 3, also has some of the movies’ props including a Kia Brisa produced in 1973 that was used for the taxi and a camera similar to that used by the German reporter.

Hinzpeter, who started his journalism career as a video reporter for the German public broadcaster ARD-NDR’s Hamburg bureau in 1963, came to Japan in 1973 as a correspondent before heading to Gwangju from Seoul in a taxi and reported the truth and tragedy behind the movement in 1980.

After retiring in 1995, he received the second Song Kun-ho journalism award in 2003, a South Korean award given to outstanding journalists. The South Korean foundation responsible for the award recognized the German’s “feat of advancing the country’s democratization by awakening Koreans’ conscience through his keen journalistic spirit that risked his life.”

Hinzpeter died in January 2016 at the age of 79 and his nail clippings and hair, which he left in 2005 when he visited Gwangju, are enshrined in the monument there as he wished to be interred in South Korea.