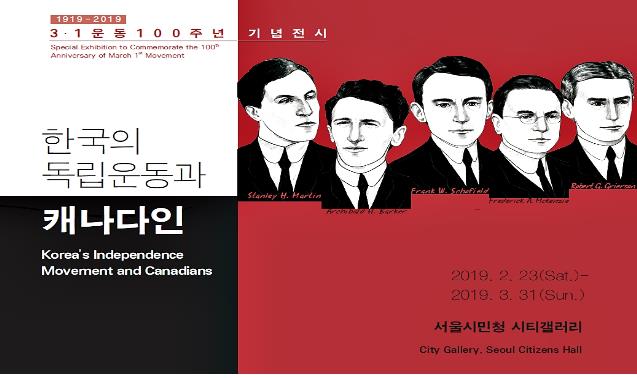 A poster for an exhibit on “Korea’s Independence Movement and Canadians.” (image: Seoul metropolitan Government))

SEOUL, Feb. 21 (Korea Bizwire) — The Seoul metropolitan government said Thursday it will open an exhibition this week on late Canadian missionary Frank Schofield and his four compatriots in recognition of their contribution to Korean independence movement against Japan’s colonial rule of the Korean Peninsula.

The exhibit, which will run from Saturday through March 31 at City Hall, will feature 50 documents, videos and photos of the five people under the theme of “Korea’s Independence Movement and Canadians.”

Schofield (1889-1970) took part in the 1919 popular movement that protested for independence and was part of Korea’s independence movement against Japan’s 1910-45 colonial rule.

He came to Korea in 1916 to work as a bacteriology professor at Severance Union Medical College in Seoul and also worked as a Christian missionary. Schofield actively took part in the Korean independence movement, reporting Japan’s brutal colonial rule to the rest of the world and helping Korean independence fighters in prison.

After Korean liberation in 1945, he devoted his life to education and medical activities, working as a veterinary professor at Seoul National University. Also known by his Korean name, Seok Ho-pil, Schofield became the first and only foreigner buried at the patriots’ section of Seoul’s National Cemetery. He was also awarded the Order of Merit for National Foundation in 1968.

The other four Canadians are Stanley Martin (1890-1941), also a medical missionary, Robert Grierson (1868-1965), the first physician missionary to Korea, Archibald Barker, a missionary, and Frederick McKenzie (1869–1931), a correspondent who covered and helped the Korean struggle against Japanese colonialists.