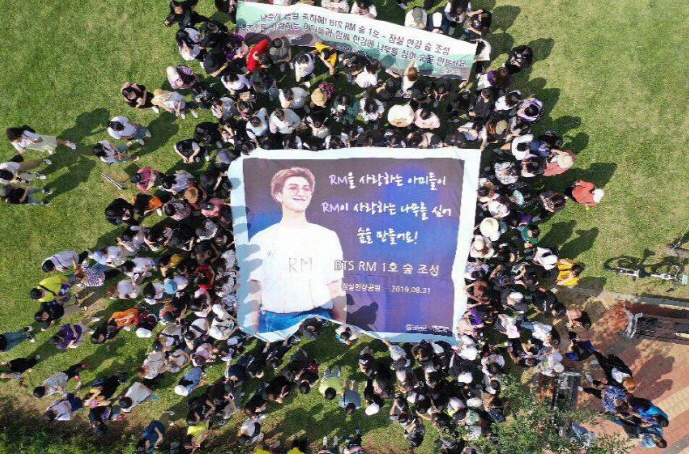 Fans gathered on Aug. 31, 2019, to create a forest in the name of RM in celebration of the BTS leader’s birthday on Sept. 12. (image: Korean Federation for Environmental Movement)

SEOUL, Sept. 3 (Korea Bizwire) — In celebration of the 25th birthday of RM, the leader of the popular boy band BTS, his fans created a forest in his name at a public park along the Han River in Seoul, an environmental group said Tuesday.

Some 250 fans gathered around the landmark clock tower on the Jamsil side of Han River Park last Saturday to celebrate RM’s birthday, which falls on Sept. 12, with the forestation project, according to the Korean Federation for Environmental Movement.

The fans planted 1,250 trees at the park, honoring RM’s steady interest in environmental issues and named it “RM Forest No. 1,” the organization said.

“I am very pleased to be able to join fellow fans at home and from abroad to form RM Forest No. 1,” an RM fan using the Twitter account, @HoneyJoonie94, said.

“We will form RM Forest No. 2 in 2020 to provide fresh air and a resting place to citizens who visit,” she said.