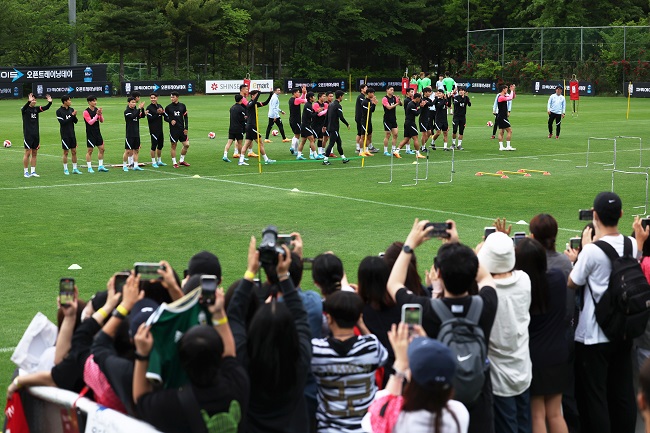 Football fans attend an open training sessions of the South Korean men’s national team at the National Football Center in Paju, Gyeonggi Province, on May 30, 2022. (Yonhap)

PAJU, May 30 (Korea Bizwire) — South Korea began preparations for a quartet of men’s football friendly matches in June with an open training session on Monday, the first of its kind during the COVID-19 pandemic.

Head coach Paulo Bento gathered his 28-man squad at the National Football Center (NFC) in Paju, north of Seoul in Gyeonggi Province, Monday afternoon, kicking off training camp ahead of four matches on the horizon.

South Korea will first host Brazil on Thursday, followed by Chile on June 6, Paraguay on June 10 and Egypt on June 14.

The Korea Football Association (KFA) opened the first day of training to the 300 lucky — not to mention quick-fingered — fans, who earned their spots through online registration on Saturday.

Once the pandemic hit, the NFC became off-limits to fans and, for a long stretch, to media as well.

Some restrictions remained in place. Fans were required to wear masks and were prohibited from asking for autographs or for selfies with players, so as to limit direct contact with them. 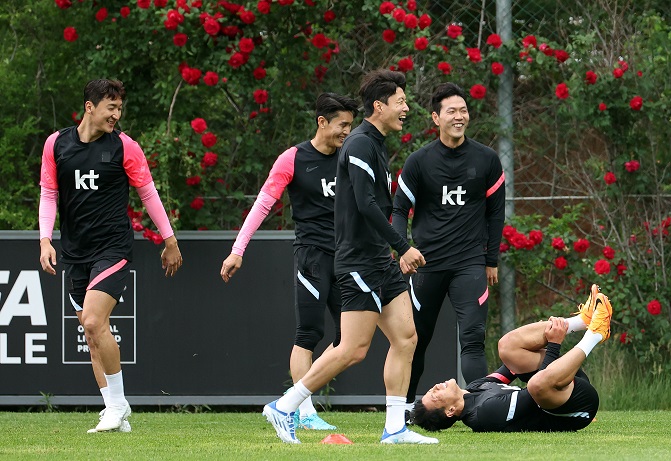 Members of the South Korean men’s national football team share a laugh during an opening training session at the National Football Center in Paju, Gyeonggi Province, on May 30, 2022. (Yonhap)

Still, those 300 fans seemed perfectly happy to be here at the NFC, filming or snapping photos of their favorite players during their 90-minute session.

Many came prepared with signs, most of them for the team’s captain and most beloved player, Son Heung-min. A handful of fans screamed, “I love you, Son Heung-min!”

Son’s popularity soared to even greater heights this month, after the Tottenham Hotspur star became the first Asian player in Premier League history to win the Golden Boot.

Whenever he had the chance, Son turned toward the fans on the sidelines to smile and wave at them.

Son and his teammates mostly fed off their fans’ upbeat vibes in a generally light-hearted session.

In the middle of a passing drill, Son doubled over with laughter when a particularly zealous fan yelled out the name of a fellow Premier Leaguer, Hwang Hee-chan of Wolverhampton Wanderers.

After the session ended, Son stopped in front of the fans and posed for photos for a few minutes.

“It’s been over two years. I am so excited to be training before fans here,” Son said before the session. “I know we can’t really get close to them (because of COVID-19 protocols) but hopefully, we’ll make it a fun day for everyone.”