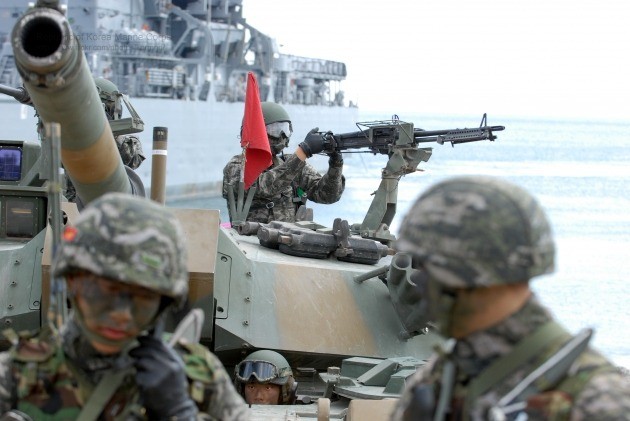 This photo provided by the defense ministry shows the South Korean and the U.S. marine corps’ joint landing exercise held in April 2013.

The two countries staged a total of 172 joint training sessions in South Korea last year, down from 191 in 2019.

By service branch, joint maneuvers between their armies tumbled to 29 times last year from 89 in 2019, and their marine corps’ combined programs were carried out seven times in 2020, compared to 24 the previous year.

But their navies held 70 rounds of combined drills last year, up from 61 in 2019, and the figure for their air forces more than tripled from 17 to 66 over the year, according to the data.

“Direct contact between service members is more necessary for Army and Marine Corps training than programs for the Navy and the Air Force,” a ministry official said.

“The two countries have striven to maintain a combined readiness posture while prioritizing the safety of service members amid the COVID-19 situation,” he added.

South Korea and the U.S. usually stage major combined exercises twice a year, along with smaller-scale drills throughout the year.

But they “indefinitely” postponed the springtime program in 2020 due to concerns over the new coronavirus, and the summertime exercise was held in a scaled-back manner in August.

In 2018, a total of 111 combined training sessions were staged, as the two sides canceled or put off joint military programs amid brisk diplomacy with North Korea.

Ahead of this year’s springtime major exercise, consultations are under way between the two sides to decide details, according to ministry officials.

It is largely expected to be staged around early March, though the pandemic and North Korea’s repeated complaints could affect their plan.

ROK is the acronym of South Korea’s official name, the Republic of Korea.