“The most important policy task is to keep the recovery momentum. The government must take a more prominent role in solidifying growth. The government is keeping close tabs on economic developments and will come up with policy measures that can best meet the country’s needs.”

“Pushing back the retirement age will put more financial burden on companies who have to retain workers longer. This pressure may make it hard for companies to hire young people. To deal with this problem, the government will push forward a wage peak system for more than 300 public corporations and institutions, starting late this year and early 2016.” 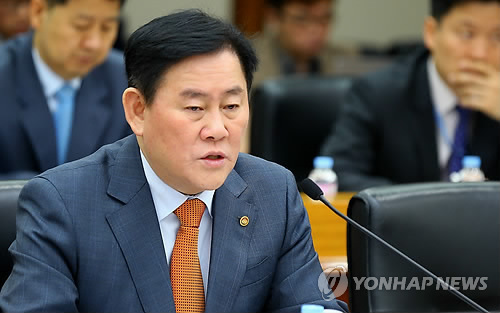 Speaking to a meeting of senior ministry officials, Finance Minister Choi Kyung-hwan said in light of a recovery in the property market and improved economic indicators, the economy continues to be picking up, though its pace is not so strong. (image: Yonhap)

SEJONG, April 27 (Korea Bizwire) — The government should take active measures to prop up the recovery of the economy that has been slow to gain momentum amid slumping exports and still weak domestic demand, the top economic policymaker said Monday.

Speaking to a meeting of senior ministry officials, Finance Minister Choi Kyung-hwan said in light of a recovery in the property market and improved economic indicators, the economy continues to be picking up, though its pace is not so strong.

The remarks come after the Bank of Korea said last week that the country’s gross domestic product (GDP) grew 0.8 percent in the first quarter, up from a 0.3 percent on-quarter gain tallied for the last three months of 2014.

However, the January-March period marked the fourth quarter in a row that growth was below the 1 percent level.

On job creation, particularly for young people, Choi said there are growing fears that the move to extend the mandatory retirement age to 60 starting in 2016 will take its toll on job creation at least for the next two to three years.

In the past, the retirement age for workers ranged from 53 to 58, depending on the position held by an employee.

Data showed that in 2014, large conglomerates hired 10 percent fewer new workers than the year before, with the number for this year also expected to fall.

The peak wage system advocated by the government calls for the retirement age of workers to be pushed back to give them greater job security. The same people benefiting from this, on the other hand, will have to accept lower wages just before retirement.

“The goal is to get the private sector to join this push for wage peaks that can give them more leeway to hire more young people,” Choi said. “The government will move to offer more incentives to companies that hire more workers.”

The finance minister also said that the National Assembly should lose no time in passing key bills aimed at stabilizing the livelihoods of ordinary people and fuel private investments, adding delaying their passage may dampen hopes for economic recovery.