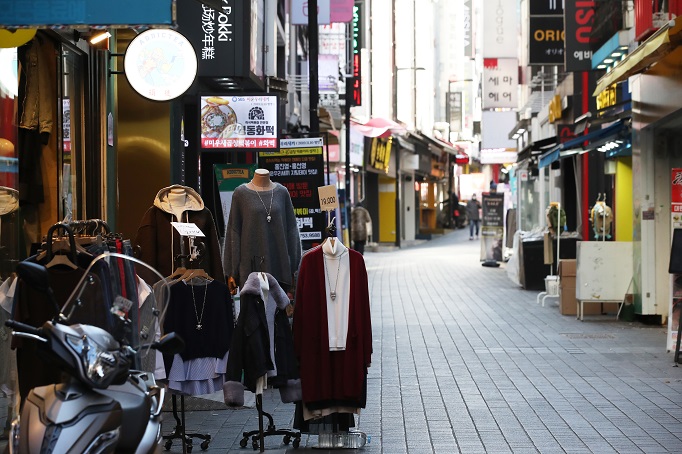 This photo, taken on Dec. 30, 2020, shows a quiet street in Seoul’s shopping district of Myeongdong in central Seoul amid an uptick in new coronavirus cases. (Yonhap)

SEOUL, Jan. 22 (Korea Bizwire) — South Korea’s finance ministry has increasingly found itself in hot water over growing calls to dig deeper into state coffers in response to the pandemic-caused economic slump, as it is wary of the country’s ballooning debt.

A row over the finance ministry’s fiscal role reignited this week after Prime Minister Chung Sye-kyun proposed an idea of introducing a state compensation scheme for business losses over COVID-19.

Chung raised the need to draw up a bill to compensate smaller merchants and shop owners for losses incurred by curbs mandated to fight against the new coronavirus outbreak.

The country has provided emergency handouts to small merchants hit hard by the new coronavirus outbreak. But Chung’s idea is a step further, as compensation would involve the government’s legal responsibility.

For the finance ministry, the proposal, if approved in parliament, will involve more huge and unexpected fiscal expenditures.

Discord became apparent when the vice finance minister initially appeared reluctant, saying that there are no such examples in foreign nations. The prime minister publicly criticized the finance ministry and ordered it to review the measure.

Finance Minister Hong Nam-ki said Friday that his ministry will “thoroughly” review the scheme to find ways to support affected people, while taking into account the country’s fiscal conditions.

“We will review the measures in a way that will be as supportive as possible,” Hong said on his Facebook page, adding that drawing up the state compensation scheme would be an “uncharted path.”

Under a pandemic compensation bill being prepared by a ruling party lawmaker, the country may need at least 98.9 trillion won (US$89.7 billion) if it seeks to compensate for part of business losses by smaller merchants.

Indeed, as South Korea’s fiscal health remains good, compared with other major countries, the country is widely viewed as having more room for aggressive fiscal spending in response to the pandemic. 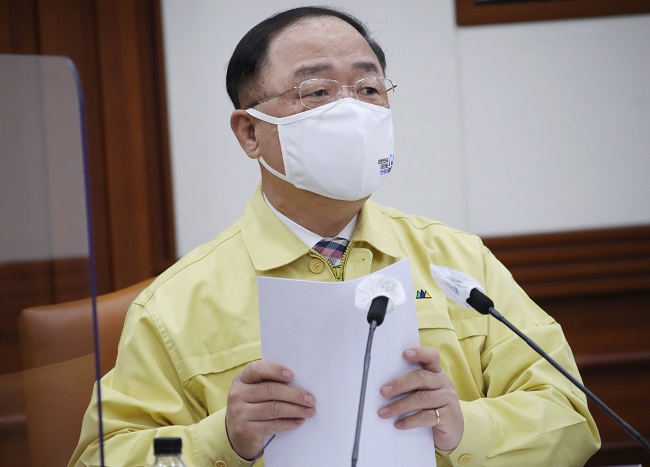 But the ministry is wary of quickly accumulating debt.

The government plans to frontload 63 percent of a record 558 trillion-won national budget in the first half. It also plans to sell state bonds totaling 176.4 trillion won this year to finance fiscal spending plans.

The country’s government debt is expected to reach 956 trillion won this year, up 150.8 trillion won from last year.

The country’s debt-to-gross domestic product (GDP) ratio, a gauge of a nation’s financial health, will reach 47.3 percent in 2021, higher than just below 40 percent before the pandemic. The ratio is expected to top 50 percent next year.

This is not the first time that the finance ministry has been at odds with the ruling party over key economic policies.

Last year, Hong initially opposed a proposal to provide up to 1 million won in emergency handouts to every household when the country drew up its first extra budget designed to cope with the fallout of the COVID-19 pandemic.

Gyeonggi Gov. Lee Jae-myung has publicly rebuked Hong, saying that the country has enough fiscal room to provide another batch of relief funds to all households. Hong stands firm for the selective provision of emergency funds.

In October 2020, the finance ministry unveiled the proposal that will limit its debt to 60 percent of GDP and its fiscal deficit to 3 percent starting in 2025. The new rule is subject to parliamentary approval.