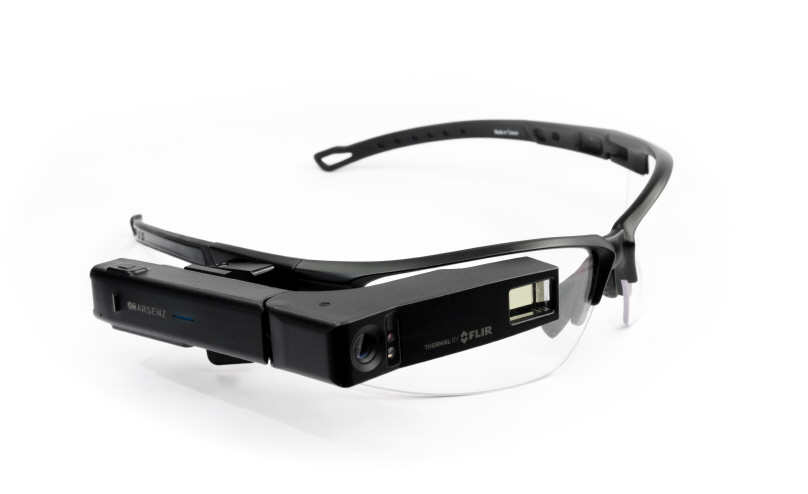 The ARSENZ ThermoGlass with a FLIR Lepton thermal sensor is a wearable augmented-reality device that mounts to glasses and allows you operate hands-free and see a thermal image. (image: FLIR Systems, Inc.)

Thermal by FLIR is a new cooperative product development and marketing program that supports original equipment manufacturers (OEMs) and product innovators who use FLIR thermal imaging sensors in their products. The program ensures that those OEMs that use genuine FLIR sensors can carry the Thermal by FLIR brand and receive additional product development and marketing support from FLIR to build and market their products.

The first partner innovations under the Thermal by FLIR program include:

“We’re excited to announce a wave of innovative products and concepts from our partners under our Thermal by FLIR program,” said James Cannon, President and CEO of FLIR. “Our goal with this program is to expand the use of thermal imaging sensors to more applications and areas. The Thermal by FLIR brand that appears on products indicates that the sensor installed is a genuine FLIR sensor and serves as a reminder to users that they are purchasing a device equipped with a thermal sensor from the world’s leader.”

The Thermal by FLIR program builds upon previous co-marketing agreements with Bullitt Group on the CAT S60 smartphone and DJI on the DJI Zenmuse XT, both of which included FLIR sensors and branding. The new Thermal by FLIR partner product innovations will be displayed at CES 2018 in the FLIR booth in the Las Vegas Convention Center, South Hall 3, #31160. FLIR is looking for the next innovative company to partner with in the Thermal by FLIR program. To learn more, visit http://www.flir.com/thermalbyflir.

Founded in 1978 and headquartered in Wilsonville, Oregon, FLIR Systems is a world-leading maker of sensor systems that enhance perception and heighten awareness, helping to save lives, improve productivity, and protect the environment. Through its nearly 3,500 employees, FLIR’s vision is to be “The World’s Sixth Sense” by leveraging thermal imaging and adjacent technologies to provide innovative, intelligent solutions for security and surveillance, environmental and condition monitoring, outdoor recreation, machine vision, navigation, and advanced threat detection. For more information, please visit www.flir.com and follow @flir.

A photo accompanying this announcement is available at http://www.globenewswire.com/NewsRoom/AttachmentNg/9f3287f9-d3bf-438c-8014-d51635adc454