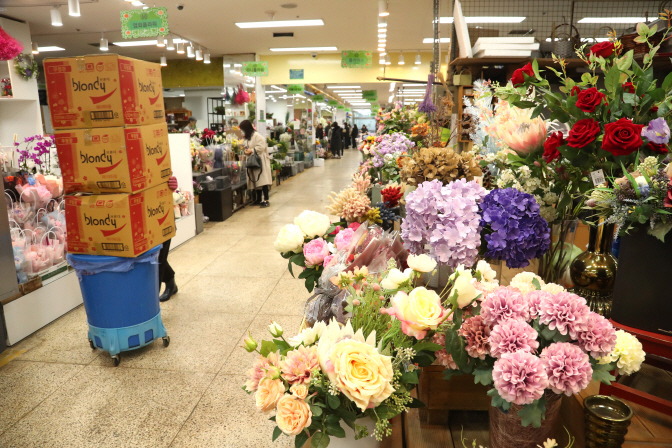 Clients are scarce at the Yangjae Flower Market in southern Seoul on Feb. 5, 2020. (Yonhap)

SEOUL, Feb. 8 (Korea Bizwire) — With schools nationwide canceling or downsizing their graduation and entrance ceremonies amid the spreading coronavirus fear, local flower farmers are taking a direct hit from the plunging demand for their products.

In South Korea, February-March is traditionally regarded as the peak and busiest season for flower growers and shops, as graduation and admission ceremonies of elementary and secondary schools and universities are successively scheduled for the month.

Flowers are the most popular gift for all those celebrating their last or first days at schools.

But a growing number of schools have chosen to cancel or scale down their February or March events to help stop the spread of the new coronavirus, dealing a disastrous blow to flower farmers and merchants.

Though official statistics are not available, some flower stores complained their sales have halved from last year, while others reported far bigger sales falls.

A merchant who owns a flower shop at the Yangjae Flower Market, the nation’s largest flower supermarket in southern Seoul, said his business losses from the ongoing coronavirus crisis are devastating.

“The length of time a flower can maintain its commerciality is five days at most. I have already marked down prices by more than half, but sales are still poor,” said the 70-year-old merchant who identified himself as Kim.

He said he used to have four employees but now hires just one every other day.

A 43-year-old man, who runs a flower shop in Shinchon, western Seoul, also griped that his sales this year reached only 20 to 30 percent of normal levels.

“Around this time of the previous years, I was busy visiting schools where a graduation or entrance ceremony was held to sell flowers. This year, however, I’ve made not a single trip to school for the past month,” he said.

A floriculturist, surnamed Tak, who has grown roses for about 40 years at seven greenhouses on his 4,290-square-meter farm in Goyang, northwest of Seoul, said he has suffered enormous losses from the coronavirus outbreak.

Tak said he sent 50 bunches of roses (one bunch contains 10 roses) to the Yangjae Flower Market earlier this week, but only five bunches were sold, with the remaining flowers discarded. 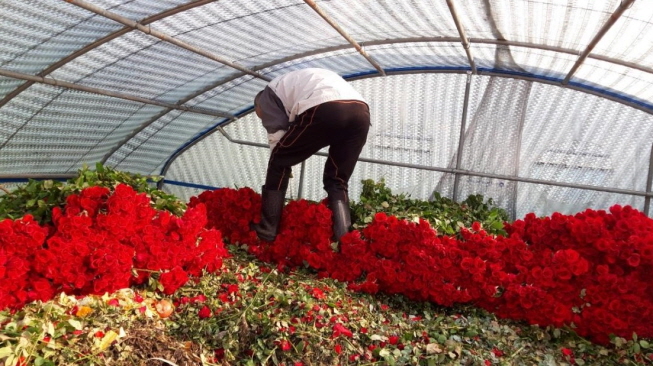 Farmer Kang Jae-hee discards roses at his farm in Miryang, South Gyeongsang Province, on Feb. 4, 2020, as bids for flowers were recently voided due to the cancellation of a number of events amid the escalating coronavirus crisis. (Yonhap)

A similar atmosphere of disappointment was being felt in other parts of the country.

In the Bullo Flower Complex in Daegu, southeastern South Korea, few clients were seen around its 70 retail stores on a recent day.

In the past graduation and admission seasons, the Bullo complex used to be crowded with clients buying flowers as gifts.

Kang Jae-hee, a rose farmer of 22 years in Miryang, near Busan, said he recently scrapped 1,500 bunches of roses to help control the flower supply in the regional market.

“I have grown flowers at huge heating expenses, aiming for this year’s graduation and admission season. But I have never experienced a situation like this over the past two decades,” said Kang, asking for special measures from the government.

A flower wholesaler in Seoul said the successive cancellations of various local government events, on top of the school ceremonies, have further added to the woes of local flower farmers.

“Outdoor sales of flowers have been hurt further due to the scarcity of pedestrians on streets,” the wholesaler said.

“We’re mulling ways to increase flower shipments to Russia and other countries on the occasion of next month’s International Women’s Day.”