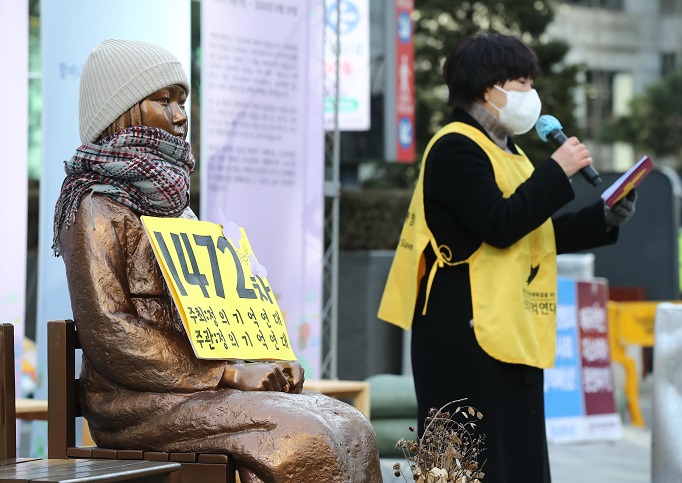 An activist speaks during a weekly protest over Japan’s forced sexual slavery during World War II on Dec. 30, 2020. (Yonhap)

Kang made the appeal in the phone call with Toshimitsu Motegi amid renewed tensions between the two countries following Friday’s landmark ruling in favor of the South Korean victims.

“Minister Kang requested that the Japanese government refrain from excessive responses,” the foreign ministry said in a press release.

“The two ministers shared the view that the diplomatic authorities of the two countries will continue close communication regarding pending issues between South Korea and Japan, including this issue,” it added.

During the talks, Motegi lodged a protest to Kang over the court ruling, saying Japan does not accept the ruling, Kyodo News reported.

Tokyo maintains the issues of comfort women were permanently resolved through a bilateral agreement in 2015 with Seoul.

But the victims have called the agreement inadequate, saying it lacks a sincere apology from Tokyo and that their voices were left out during the negotiation process.

The latest flare-up of tensions came as Seoul seeks to mend ties with Tokyo as part of efforts to create fresh diplomatic opportunities to resume nuclear diplomacy with North Korea.

The ruling also came as U.S. President-elect Joe Biden has pledged to knit back America’s democratic alliances to shore up its global leadership and jointly confront global challenges on security, climate change and other fronts.