“If they follow you always, then they’re not talented. Talented players have their own ideas. People who have experience in football can show them some ways. At the end, the players have to see (for themselves) if they can take the next step.”

“It wasn’t just a matter of being tough; it was a matter of trying to guide a young player who was very ambitious and skillful. Young players will make mistakes and they’re entitled to do so. You have to show the players different ways to go to the next step.”

“These players aren’t babies anymore, and they’re growing into football manhood. Older coaches might have the experience in other leagues and knowledge from the sport. They must use it. On the other hand, coaches must not overreact. In the end, the players must find their way.” 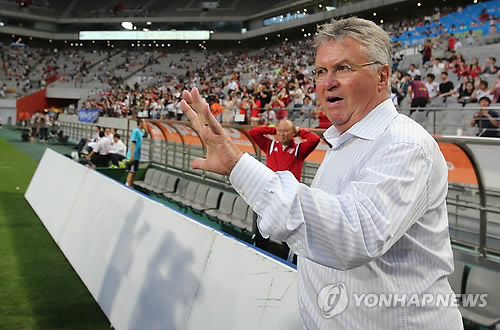 SEOUL, May 6 (Korea Bizwire) — Guus Hiddink, a successful football head coach from the Netherlands, has made a career out of building something from nothing, of bringing out the best in underachieving players.

In the book of the 68-year-old Dutchman, doing so requires some tough love.

Speaking to Yonhap News Agency during his visit to Seoul on Wednesday, Hiddink, former South Korea boss currently coaching the Netherlands, said confrontations are bound to happen when working with young players.

Hiddink remains a national icon in South Korea, 13 years after coaching the underdog to the semifinals at the 2002 FIFA World Cup. He said he still visits the country two, three times a year for charitable causes and called South Korea “my second home.” This week, he’s here as an honorary president of the organizing committee for the Seoul International Blind Sports Federation World Games.

Hiddink cited his experience with the current Dutch star Arjen Robben when he coached the dynamo on the top domestic club PSV Eindhoven. Earlier in the week, former South Korea international Lee Young-pyo, who played for Hiddink on the national team and later on PSV, penned a newspaper column saying he knew of Hiddink’s tough-love ways with Robben when the player was still a teenager.

Hiddink acknowledged he had his run-ins with Robben, but they were “always fair and direct.”

“You have to try to (coach) with all the love and passion you have for young players,” the coach added. “And Robben made good choices.”

Hiddink’s theory may well apply to a current situation in South Korea involving a hotshot teenager named Lee Seung-woo. The 17-year-old forward, who plays for FC Barcelona’s under-19 side, recently made headlines for his cantankerous behavior during an invitational under-18 tournament in South Korea. Lee, the youngest player for the host, often became visibly frustrated on missed opportunities and took out his anger on advertising boards.

For years, Lee has been groomed to be the next great star in South Korean football. Some say Lee should be given more leeway with his behavior because he’s still young and trying to do otherwise may discourage him. Critics point out Lee must get his act together and learn to play better within a team. Lee Young-pyo also expressed his dismay at Lee’s demonstrative behavior in his column.

Hiddink said maintaining balance will be the key.

“These players aren’t babies anymore, and they’re growing into football manhood,” he said. “Older coaches might have the experience in other leagues and knowledge from the sport. They must use it. On the other hand, coaches must not overreact. In the end, the players must find their way.”