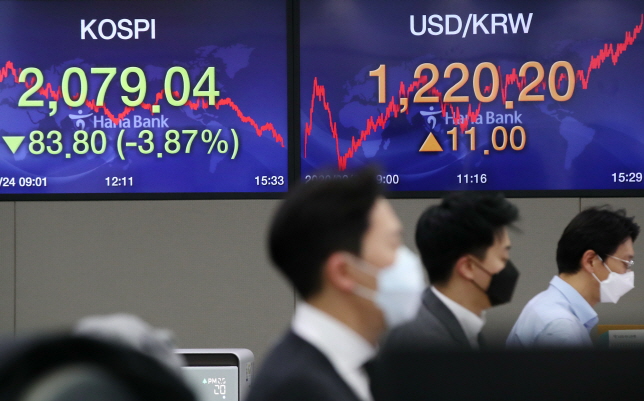 An electronic signboard at KEB Hana Bank in Seoul shows the benchmark Korea Composite Stock Price Index (KOSPI) down 3.87 percent to close at 2,079.04 on Feb. 24, 2020, amid the spread of the new coronavirus in the country. (Yonhap)

SEOUL, Feb. 26 (Korea Bizwire) — Foreign investors are flocking to the safety of South Korean bonds after pulling out of stocks this year amid the spread of the new coronavirus, data showed Wednesday.

Offshore investors held 129.7 trillion won (US$107 billion) worth of listed government and corporate bonds as of Monday, up about 6 trillion won from the end of last year, according to the data from the Financial Supervisory Service.

Foreigners’ increased bond investment this year marks a turnaround from the last quarter of 2019. Their bond holdings fell to 123.7 trillion won as of end-2019 after peaking at 127.2 trillion won three months earlier.

But offshore investors have been loading up on local debt this year, with the amount soaring to 128.4 trillion won at the end of January.

Offshore investors’ flight to quality contrasts with their exit from the local stock market. Foreigners have sold a net 1.1 trillion won worth of local stocks this year as of Tuesday.

In particular, their net selling reached 786 billion won and 769.6 billion won on Monday and Tuesday, respectively, when the number of confirmed cases spiked.

The equity market has remained shaky, with the benchmark Korea Composite Stock Price Index (KOSPI) plunging 3.1 percent on Jan. 28. The key index tanked 3.87 percent on Monday in the wake of a surge in coronavirus cases.

In contrast, bond returns have been on the decline. The yield on three-year government bonds stood at 1.237 percent Thursday, hovering below the central bank’s key interest rate of 1.25 percent.

Market watchers said foreign investors’ bond investment is getting a further boost from expectations that the Bank of Korea may cut the base rate at its rate-setting meeting Thursday to help ease the virus’ impact on the economy.