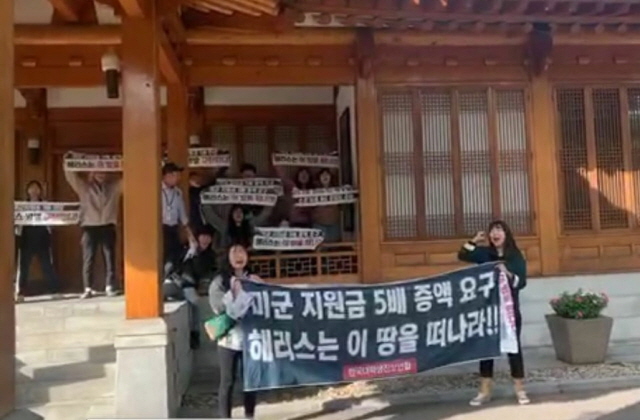 Members of a progressive association of South Korean university students stage a protest inside the residence of U.S. Ambassador Harry Harris in Seoul on Oct. 18, 2019, in this photo captured from the group’s Facebook account.

SEOUL, Nov. 20 (Korea Bizwire) — The foreign ministry and the National Policy Agency (NPA) will hold a meeting this week with officials from foreign diplomatic missions here to discuss ways to beef up security in and around their compounds, the ministry said Wednesday.

The meeting, slated for Thursday, aims to put together measures to better protect foreign diplomats and missions after a group of progressive college students broke into the residence of U.S. Ambassador Harry Harris in central Seoul last month.

In July, an elderly man died after setting himself on fire in front of a building that houses the Japanese Embassy.

Thursday’s meeting will be attended by South Korean officials and foreign diplomats from several countries, including the U.S., Japan, China and Russia, a ministry official said.

A similar meeting was held last week, without the foreign representatives.

“We will brief the diplomats on what the ministry and the NPA can and will do in terms of strengthening their safety and we hope to also hear from them about any difficulties that they are experiencing,” he said.

Among the envisioned measures are setting up a hotline between the ministry and the NPA to better communicate and respond to any incidents, like unauthorized access.

The ministry is also looking into sharing with the police more information about the foreign missions and their countries that may be relevant to security, it said.