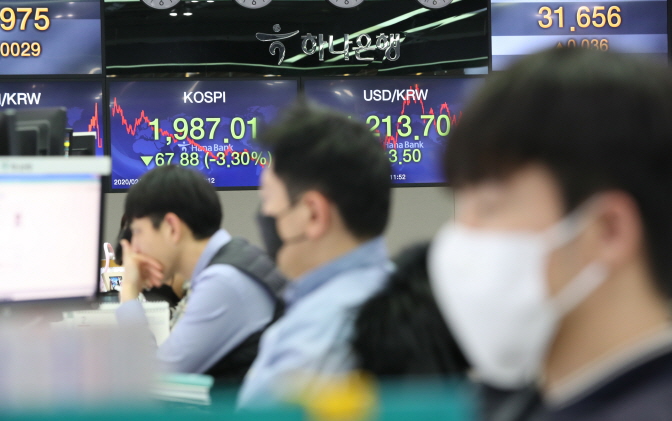 An electronic signboard at KEB Hana Bank in Seoul shows the benchmark Korea Composite Stock Price Index (KOSPI) down 3.30 percent to close at 1987.01 on Feb. 28, 2020 amid the spread of the new coronavirus. (Yonhap)

Offshore investors sold a net US$3 billion worth of South Korean stocks last month, compared with net selling of $165 million a month earlier, according to the data from Yuanta Securities Korea Co.

The spike was attributed to investor flight to quality amid increased volatility in emerging markets in the wake of the fast-spreading coronavirus.

Massive foreign selling in Brazil was driven by its political uncertainty and the sustained sluggishness of the largest economy in South America. Brazil recorded the fifth consecutive month of foreign net selling.

Foreign net selling of Taiwanese stocks also surged from $1.14 billion amid escalating worries about the epidemic due to its proximity to China and bilateral ties, according to the brokerage.

India was the sole emerging economy with net foreign buying, which came to $414 million in February, down from $1.83 billion the previous month.

Market watchers have voiced concern that foreign investors will likely keep pulling money out of emerging economies for the time being amid the global spread of COVID-19.

Foreign investors have been in net selling mode in South Korea this month, offloading more than 1 trillion ($840 million) worth of stocks on Monday and Tuesday, respectively.

South Korea has reported the largest number of coronavirus patients outside China. As of early Wednesday, there were nearly 5,200 confirmed cases in the country, with the death toll reaching 32.