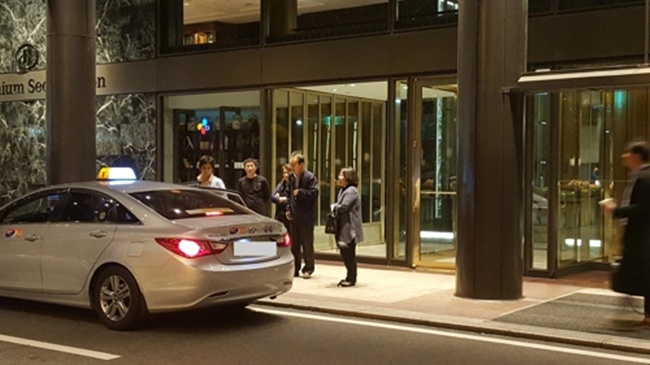 This undated photo provided by the Seoul Metropolitan Government shows a crackdown on a taxi fare scam under way at a Seoul hotel. (Image: Yonhap)

SEOUL, April 18 (Korea Bizwire) – The overcharging of foreigners by taxi drivers in the Seoul metropolitan area appears to be tapering off, the municipal government said Tuesday, citing the results of its continued crackdowns.

According to the Seoul Metropolitan Government, the average taxi fare paid by foreign visitors for trips from Incheon International Airport, west of Seoul, to hotels in the capital city fell from 84,600 won (US$75) in the August 2015-July 2016 period to 68,800 won in the August 2016-March 2017 period.

Officials at the Seoul government said the launch of its special control team in August 2015 and its intensive crackdowns on taxi fare scams appears to have contributed to reducing the amount of overcharging.

Foreign tourists being ripped off by taxi drivers within Seoul also has decreased, they noted.

A ride from Dongdaemun, a major shopping district in downtown, to Myeongdong, Yongsan and other frequent central Seoul destinations cost foreign passengers 21,800 won on average in recent months compared with 48,900 won in the 2016-2015 period. The relatively short trip usually costs just 4,000 to 6,000 won.

“There has been a notable change. Unlike in the past, taxi drivers appear to be refraining from excessive overcharging of foreigners to avoid the crackdowns. Instead, they are suspected of continuing to rip off tourists on a smaller scale,” an official said.

The Seoul government said it will mobilize more civil servants fluent in foreign languages to crack down even on small-sum rip-offs. In one of the crackdown methods, civil servants seek to interview foreign passengers getting out of taxis or vans at the entrances of major hotels, it noted.

Under the current rules, a taxi driver is fined 200,000 won for the first overcharging offense. In case of a third violation, the fine increases to 600,000 won and the driver’s license is nullified.