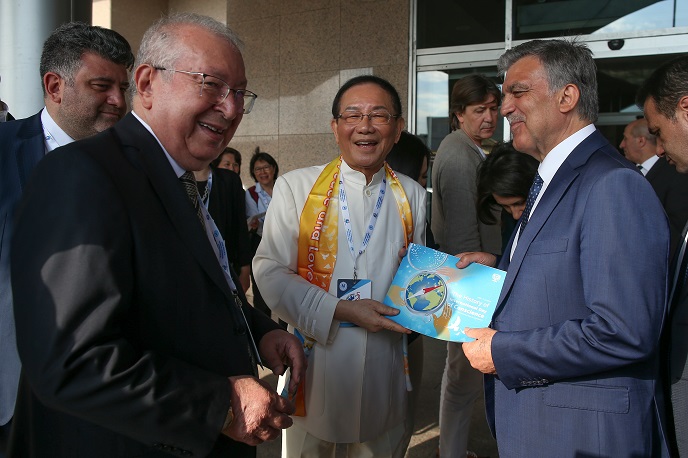 ISTANBUL, Turkey, June 10 (Korea Bizwire) — The pain and suffering brought forth by the war between Russia and Ukraine that broke out a few months ago has allowed the people of the world to deepen their understanding about the importance of peace. The Federation of World Peace and Love (FOWPAL) was invited by Dr. Akkan Suver, president of the Marmara Group Foundation, to participate in the 25th Eurasian Economic Summit in Istanbul, Turkey on June 7-9.

Dr. Akkan Suver, who initiated the Eurasian Economic Summit, warmly welcomed all participants to the event, one of the world’s most important summits, which is held annually and brings together decision makers and experts in the fields of economics, politics, religion, energy, sociology, and security. Through dialogue, the Summit fosters active collaboration among leaders in various fields for sustainable development.

This year’s summit, under the theme of “Build Back Better,” focused on the post-pandemic era and the major impact of the conflict between Russia and Ukraine on the world, while addressing issues, such as new energy economy, global partnership, digitalization, a greener planet, dialogue among cities, food and commodity crisis, hunger, poverty, climate change, involuntary migration, and others. It was attended by hundreds of distinguished guests from over 40 countries, including heads of state and government, ambassadors, ministers, mayors, and leaders from all walks of life.

Dr. Hong, Tao-Tze, president of FOWPAL, delivered a speech, emphasizing, “We firmly believe that a culture of peace and a culture of conscience are the foundation that sustains all cultures of the world, and they are also the core of sustainable economic development. A good culture nurtures a good education while a quality education leads to a healthy economy. Through the promotion of a culture of conscience and conscience-driven education, and by integrating the strengths of other cultures and education systems, we will be able to foster national economic growth and usher in stability and prosperity.” He pointed out, “To resolve conflicts with love and conscience is the embodiment of great wisdom.”

FOWPAL has been promoting the International Day of Conscience and the importance of conscience in the past few years and has received warm responses during the Summit. FOWPAL was invited to deliver five sessions of cultural performances, including martial arts, dance, music, and singing. The fabulous performances and profound cultural meanings touched people’s hearts and electrified the audience. In the opening session of the summit, FOWPAL amazed the attendees with an elegant “Peacock Dance,” which symbolized love, peace, and warmth, brought blessings to the Summit, and conveyed FOWPAL’s best wishes for the end of the war and pandemic.

Young volunteers for FOWPAL also performed a number of inspiring songs, such as “We Can Change the World,” “A Prayer for Peace,” and “We Are One World,” conveying their voices and their vision of a united world where people treat one another as family, which was in line with the spirit of the Summit. Through these performances, FOWPAL encouraged people to work together and take action to create a peaceful and sustainable world. FOWPAL’s performances not only gave people a sense of joy and positive energy, but also spread the culture of conscience, which resonated with the audience.

Another highlight of the summit was the ceremonies of ringing the Bell of World Peace and Love. The Bell of World Peace and Love, which weighs 240 kg and has consolidated the wishes for peace of over 400 leaders, rang in Turkey for the first time. On the closing day of the conference on June 9, the organizer invited FOWPAL to specially host the solemn ceremony of ringing the “Bell of World Peace and Love.” Seven influential leaders rang the Bell, including President Emil Constantinescu of Romania (1996-2000), President Filip Vujanović of Montenegro (2003-2018), President Moncef Marzouki of Tunisia (2011-2014), President Petru Lucinschi of Moldova (1997-2001), President Fatmir Sejdiu of Kosovo (2006-2010), Dr. Akkan Suver, and Djabir Doko, Deputy Minister of Political System and Inter-Community Relations of North Macedonia. President of Croatia Stjepan Mesic (2000-2010), who rang the Bell in 2016 in India, also attended the summit.

Dr. Akkan Suver rang the Bell and stated, “For peace! For peace! For peace!” He said in the name of peace, stability, love, and world peace, the bell ringing ceremony was conducted. This was the first time that Dr. Suver participated in such a ceremony. He emphasized that it is important for everyone to work together and have dialogue to promote stability and conscience. “We need a dialogue, and if we have a dialogue, we can find any solution to any problem.” He congratulated the FOWPAL delegation and expressed his gratitude to FOWPAL for organizing the bell ringing ceremony.

Moncef Marzouki, president of Tunisia (2011-2014), when interviewed by FOWPAL during the summit, stated, “We need peace. What’s happening between Ukraine and Russia is danger not only for this region, but the whole world because it could lead to the Third World War, so we badly need initiatives like yours. And I do support what you’re doing because once again, peace is the most important thing for everybody. We cannot talk about human rights unless we have peace.” “What you are doing is extremely important. I would like to congratulate you. Please go ahead. We need every initiative, everybody supporting peace.”

Dr. Werner Fasslabend, who is former defense minister of Austria and rang the Bell in 2018, stated that conscience is “a personal regulator, a personal principle that makes you go the right way. And if everybody does it, it will lead into a world of love and peace. Only when there is love in the world, when people try to understand each other, when we try to cooperate, not be against the other side, but to do something in common, then you can reach peace and stability. This is also the basis for freedom.”

The top of the Bell of World Peace and Love is engraved with “Love of the World, A Declaration of Peace.” FOWPAL hopes that people can return to a peaceful world in which there is no pain, no fear, no war, and no suffering. To date, 417 important leaders from 128 countries have rung the Bell, including 49 heads of state and government, seven Nobel Peace Prize laureates, United Nations ambassadors, and leaders from all walks of life. FOWPAL just finished its trip to Stockholm, where it hosted ceremonies of ringing the Bell of World Peace and Love on June 1-3, 2022, during Stockholm+50, and eleven leaders, including environment ministers, UNEP officers, and environmental activists, rang the Bell to pray for the sustainable development of all humanity.

FOWPAL has been actively involved in environmental protection. It participated in the World Summit on Sustainable Development (WSSD) in Johannesburg, South Africa in 2002 and hosted ceremonies of ringing the Bell of World Peace and Love, where six visionary leaders, including the then President of Ethiopia Girma Wolde-Giorgis, rang the Bell.

The 2012 United Nations Conference on Sustainable Development (Rio+20) was held in Rio, Brazil to discuss the challenges and opportunities of sustainable development. During the conference, FOWPAL hosted the ceremony of ringing the Bell of World Peace and Love, and 25 visionary leaders rang the Bell, including the then President of Costa Rica Laura Chinchilla Miranda; President of East Timor and 1996 Nobel Peace Prize laureate José Ramos-Horta; the then Prime Minister of Bhutan Jigme Thinley; Pedro Passos Coelho, the then Prime Minister of Portuguese Republic; and Angel Gurria, the then Secretary General of Organization for Economic Co-operation and Development (OECD), consolidating more positive energy and hope for a sustainable future of love and peace on Earth.

FOWPAL urges everyone to take action to support love, peace, conscience, and human rights. To date, the Declarations for Human Rights of World Citizens and Peace have been endorsed by over 3.7 million people in 179 nations, and the Declaration for the Movement of An Era of Conscience and Declaration of International Day of Conscience have been endorsed by 330,000 people in 196 nations. FOWPAL hopes that everyone will act with conscience so that the world will be peaceful, and that everyone will be joyful so that every family will be happy.

About the Federation of World Peace and Love (FOWPAL): Established in 2000 in the United States by Dr. Hong, Tao-Tze, FOWPAL is an international love and peace organization, with members from around the world. It is guided by the principle that changing the world for the better starts with one good thought. Over the past two decades, FOWPAL has promoted conscience, love, and peace globally and attended Earth Summits to promote SDGs. It had worked with various Permanent Missions to the UN through conferences, bell ringing ceremonies, and declaration signing, making the UN’s adoption of the International Day of Conscience in July 2019 possible. They have held over 55 webinars in the past two years, fostering conscience-based sustainability.

The photo is also available at Newscom, www.newscom.com, and via AP PhotoExpress

Source: Federation of World Peace and Love via GLOBE NEWSWIRE