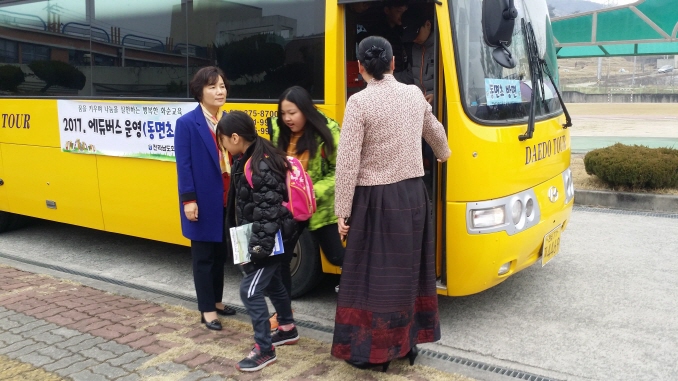 MUAN, Jan. 11 (Korea Bizwire) — The Jeollanamdo (South Jeolla Province) Office of Education announced Friday that from March, students living in remote areas will be given free taxi rides to and from school.

The so-called ‘Edu Taxi’ service is intended for students living in rural areas who are unable to use public transportation and is similar to the ‘100 won (US$0.09) taxi’ service that has spread nationwide.

The Office of Education estimated that about 770 students would utilize the taxi service, and allocated funding accordingly.

Students will be chosen to use the taxi service by considering the distance from their homes to bus stops and the number of buses running.

The selected students will be able to use the taxis free of charge, and the city will compensate the driver based on the metered fare.

Along with the new ‘Edu Taxi’ service for students, the number of ‘Edu Buses’ running in South Jeolla Province will also increase, reducing inconvenience for students living in areas with poor public transportation options.

The number of buses will increase from 45 to 72. While it the program is expected to cost 3.3 billion won (US$2.95 million), 1,500 students from 66 different schools are expected to use the buses.

Although the government is gaining public sympathy for the expansion of transportation welfare for students in rural areas, some point out that it is not worth it considering the lack of basic funding for education programs.