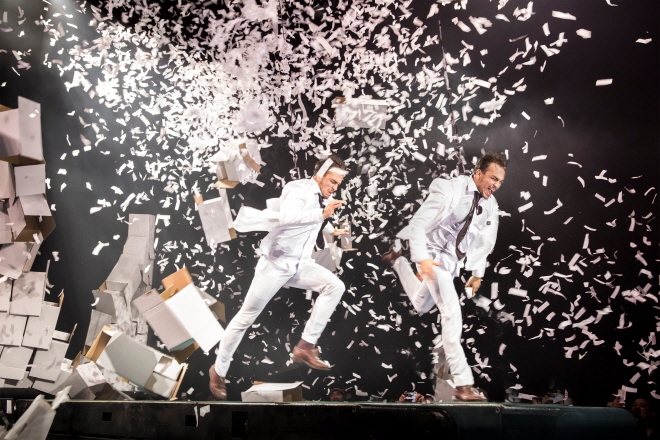 The concert-like non-verbal musical, which started its Seoul run in April, sold the most tickets in July, according to the data from the Korea Performing Arts Box Office Information System (KOPIS).

It is about people having a party and celebration, filled with acrobatics, dance, music, props and lights, with the performers and the audience interacting with each other.

Led by the cultural ministry, the KOPIS was launched in late June to create a database of ticket sales and productions for theater plays, musicals, classical concerts and various other non-cinematic shows in the country.

The box office data is based on the percentage of tickets sold out of the total seats for a performance, excluding complimentary tickets. But the exact number of ticket sales has not been disclosed to the public yet.

Korean-made musical “Hero” on Korean independent activist Ahn Jung-guen came in next, followed by musical “Xclaibur,” the Korean edition of the world-famous “Artus-Excalibur.”

“Misery,” based on Stephen King’s novel, topped the stage play chart, while “Another Country,” the Korean adaptation of the play written by the English playwright Julian Mitchell, finished second.

In the classical concert section, the Korea Soloists Orchestra 9th Anniversary Concert was the most sought-after performance last month.

In July, the South Korean performance market posted a total of 17.2 billion won (US$14.4 million) in sales, with 1,090 shows and performances drawing about 650,000 attendees over the cited period.