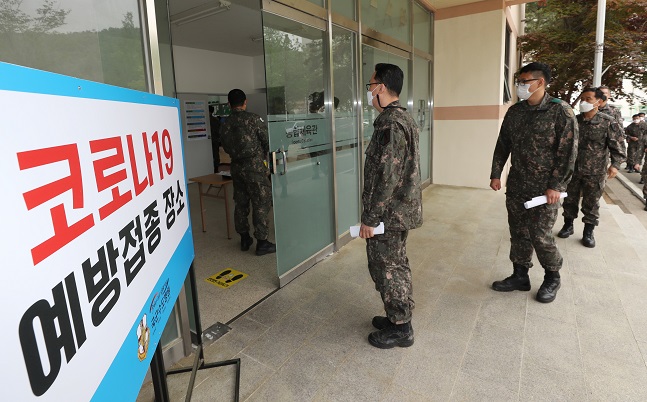 Soldiers wait in line to be vaccinated at the Armed Forces Capital Hospital in Seongnam, south of Seoul, on April 28, 2021, in this photo provided by the Kookbang Ilbo. (Yonhap)

SEOUL, April 28 (Korea Bizwire) — South Korean health authorities said Wednesday that fully vaccinated people will be exempted from the country’s mandatory 14-day isolation period from early next month as the country is struggling to speed up the vaccination campaign.

Health authorities said that, under the country’s anti-infection measures, those who have been fully inoculated will no longer be required to self-isolate themselves after coming in close contact with COVID-19 patients or entering the country from overseas from May 5 if they test negative for the virus.

South Korea currently requires those who come into close contact with virus patients to self-isolate for 14 days.

The new rules will be applied to those who have been fully vaccinated in South Korea, regardless of their nationality, two weeks after receiving their final shot.

Health authorities, however, said that such vaccinated people will still be monitored for 14 days and require two COVID-19 tests over the period.

South Korea currently administers vaccines from Pfizer and AstraZeneca, which require two doses. The country’s drug safety agency has approved vaccines from Johnson & Johnson, but products from Moderna and Novavax are not yet approved.

The exemptions also do not apply to people who have been vaccinated overseas with shots not approved in South Korea, such as Russia’s Sputnik V and China’s Sinopharm vaccines.

Authorities added that they plan to gradually expand the new rules for people who receive vaccinations overseas by making agreements with other countries. 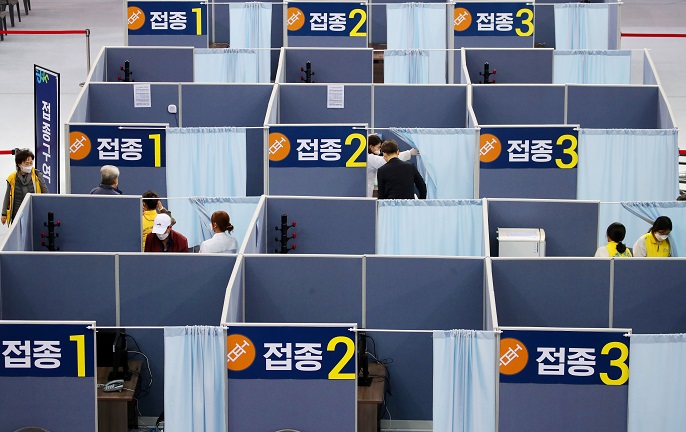 Arrivals from foreign countries who have completed their vaccinations in South Korea will also be exempt from existing self-isolation rules.

Authorities will unveil the details of the exemption plan on Thursday.

South Korea currently requires all overseas entrants to self-isolate themselves for 14 days at their residences or government-designated facilities.

The new exemptions, however, will not apply to arrivals from countries that have more contagious COVID-19 variants, such as South Africa and Brazil.

Passengers arriving from Britain, Brazil, Africa and India are required to stay at government-designated facilities for quarantine and have to test negative to be allowed to leave and go into two-week self-quarantine.

Those flying in from Tanzania and South Africa, countries with high COVID-19 variant rates, must stay at the public quarantine facility for 14 days.

South Korea has so far inoculated nearly 2.6 million people, or 5 percent of its 52 million population, with one dose of COVID-19 vaccines since it started its vaccination campaign in late February.

The country estimates that there will be around 60,000 people who have immunity against the virus by May 5.