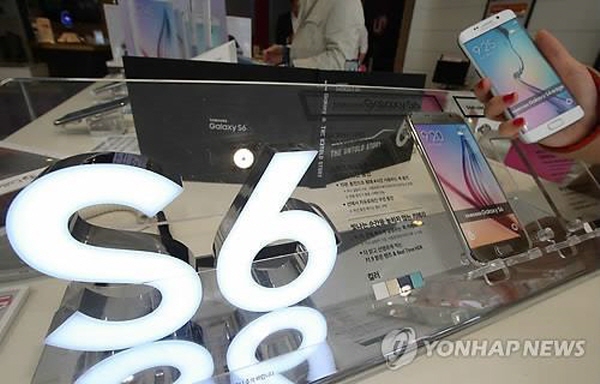 With the market cheering such cutting-edge technologies, industry watchers have been painting rosy pictures of the Galaxy S6. (image Yonhap)

South Korea’s No. 1 tech giant had sold a little over 200,000 units of the two smartphones here as of Sunday since their launch on April 10, sharply falling short of the 300,000 preorders, according to the data, indicating that earlier sales forecasts may be exaggerated.

With the market cheering such cutting-edge technologies, industry watchers have been painting rosy pictures of the gadgets, with Hong Kong-based industry tracker Counterpoint suggesting the two will sell more than 50 million units this year, while some researchers even gave a 70 million-unit forecast.

But some industry watchers say the 10-day sales figure is not alarming, given that South Korea’s already saturated smartphone market is currently dented by the country’s regulations on subsidies.

South Korea’s telecom watchdog has been ramping up efforts to bring transparency by banning mobile carriers from paying out subsidies far exceeding the legal ceiling to wrest subscribers away from competitors.

While mobile carriers’ subsidies for purchasing the two smartphones were no more than 210,000 won (US$193.9) upon the release, the carriers expanded the amount over the previous weekend, apparently reflecting the sluggish sales. The country’s maximum legal ceiling for handset subsidy currently stands at 330,000 won.

“We expect sales will improve soon, as the mobile carriers decided to increase subsidies on the Galaxy S6 series,” a local handset retailer said.