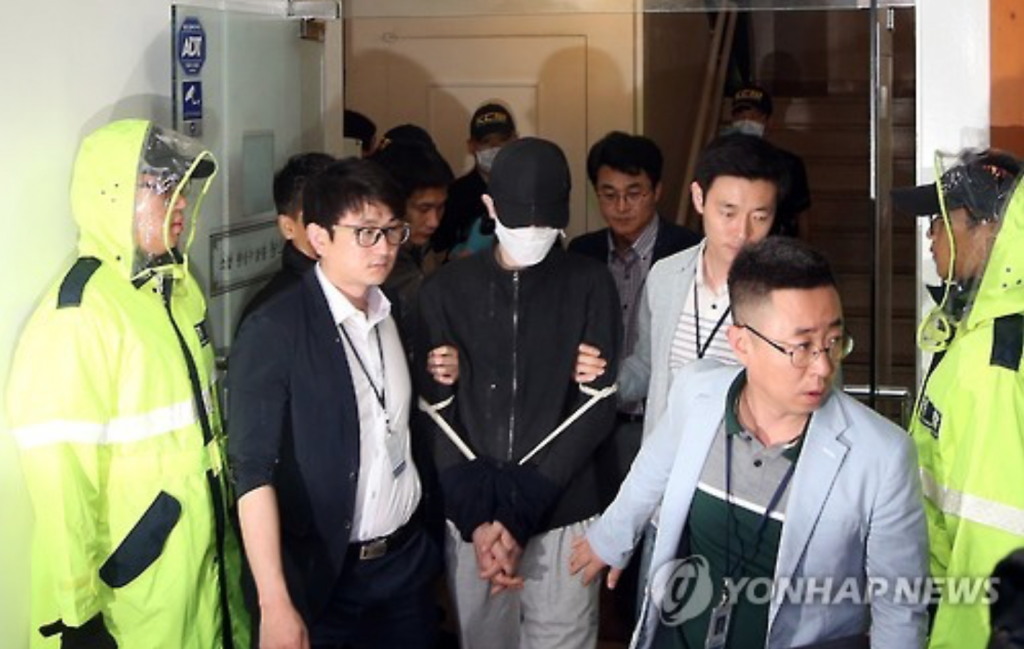 Flanked by police officers, the suspect behind the brutal murder of a 22-year-old woman exits the bathroom of a karaoke bar near a subway station in Seoul’s upscale Gangnam district on May 24, 2016, after staging a reenactment. (image: Yonhap)

SEOUL, Oct. 14 (Korea Bizwire) – A local court on Friday handed down a 30-year jail term to a man accused of stabbing to death a 22-year-old woman near one of the country’s busiest subway stations in Seoul, which sparked nationwide protests.

The Seoul Central District Court convicted the man, surnamed Kim, of stabbing the victim, whose identity was withheld, multiple times in a bathroom in a building near Gangnam Station in May. The victim was a complete stranger to Kim.

Kim waited for about 50 minutes for a woman to show up at the bathroom, according to prosecutors. When the victim came into the unisex restroom, Kim attacked her with a knife he had brought. The heinous crime sparked nationwide debate over crimes against women.

The court said Kim seems to have committed the crime not because he hated women, but because he had a fear of men which led him to target a comparatively vulnerable woman.

“The life of a 22-year-old victim was ended in a way that she would not have expected in any way and the bereaved families cannot live normal lives due to the shock,” it said.

The court said it took into consideration that Kim has a mental illness.

He has a record of being hospitalized for schizophrenia more than six times since 2009. Since he left the hospital for the last time in January, he had not taken his medication or received treatment and had lived on the streets since March, according to prosecutors.

The case has sparked a nationwide debate over crimes targeting women in the country. Thousands of South Korean women took to the streets after the incident, paying their respects to the victim, and voiced the need to intensify punishment for crimes targeting vulnerable members of society.