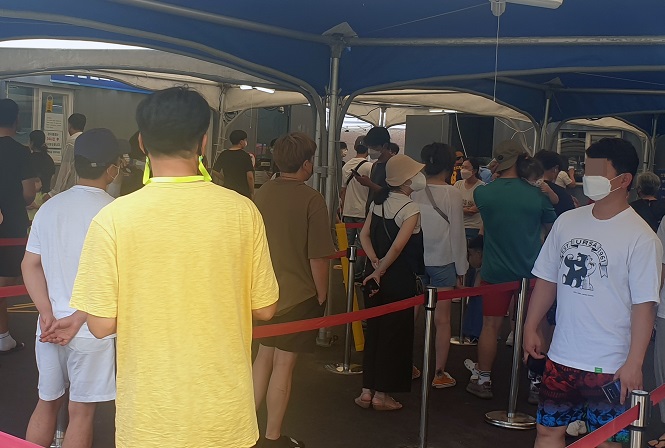 People wait in a long line to take coronavirus tests at a temporary testing center in Gangneung on the South Korean east coast on July 18, 2021. (Yonhap)

GANGNEUNG, July 19 (Korea Bizwire) — Gangneung, one of South Korea’s most popular destinations for summer vacationers, mulls over the nighttime closure of beaches and other unprecedented quarantine measures against COVID-19, officials said Monday, following an earlier decision to lift its social distancing rules to the toughest restrictions of Level 4.

Gangneung, an east coast city 240 kilometers from Seoul, has said that Level 4, the highest in the nation’s four-tier social distancing system, will be enforced for seven days, beginning at midnight Monday, to cope with a recent surge of COVID-19 cases.

Gangneung has become the first city outside of the greater Seoul area to be put under Level 4.

During the seven days, the Gangwon Province city will ban private gatherings of three or more people after 6 p.m., impose a 8 p.m. curfew on restaurants and cafes, and order a shutdown of clubs and bars.

The 8 p.m. curfew is stronger than the capital area’s 10 p.m. closure.

On top of that, the Gangneung city government is considering closing all of its beaches from 7 p.m. to 6 a.m. the following day, which will be far stronger than the current eating and drinking ban on those beaches during the same hours.

The planned upgrade to Level 4 comes only three days after Gangneung raised its social distancing scheme to Level 3. 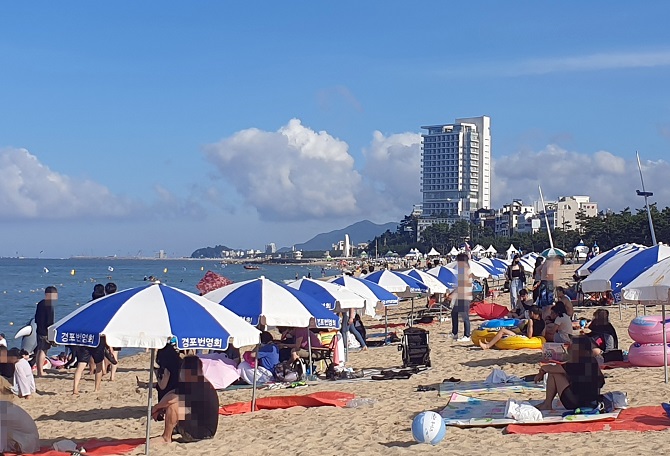 Vacationers try to cool off from the summer heat at Gyeongpo Beach in Gangneung on the South Korean east coast on July 17, 2021. (Yonhap)

City officials said the unprecedented move is inevitable as the share of new cases from Gangneung out of Gangwon Province’s total has lately topped 40 percent.

In July, Gangwon Province has so far reported 319 COVID-19 cases and Gangneung accounted for 41.9 percent of them, according to official data.

Moreover, the province’s new daily cases soared to a yearly high of 52 last Saturday, one day after the opening of all public beaches on the east coast.

Provincial and municipal officials are also raising fears that the recent surge in COVID-19 patients may lead to a shortage of hospital beds in the province.

The province’s hospital bed occupancy rate rose to 68.8 percent as of midnight Sunday and a residential treatment center, which opened Friday currently shows a utilization rate of 39 percent.

The authorities are pushing to open more residential treatment centers and ordered all entertainment facility and education service employees to undergo coronavirus tests by the end of this month.