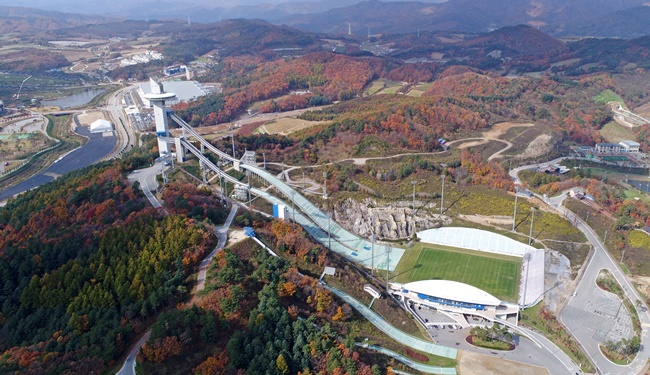 The Gangwon provincial government announced the four-point plan dubbed Gangwon Vision 2040 at a meeting on Friday, as the province is poised to raise quality of life and reach a gross regional domestic product of over 3 percent of the nation’s total by the end of 2040. (Image: Yonhap)

The Gangwon provincial government announced the four-point plan dubbed Gangwon Vision 2040 at a meeting on Friday, as the province is poised to raise quality of life and reach a gross regional domestic product of over 3 percent of the nation’s total by the end of 2040.

The blueprint includes scores of regional projects set to be completed by 2040 after the Winter Olympics is held in Pyeongchang next year, under the slogan, ‘the future of nature and humans, Login Gangwon’.

Under the four main strategies, ‘Well-Come’, ‘Wonderful-Stay’, ‘Dream-Works’, and ‘Dramatic Nature’, the local government has revealed plans for 48 projects with 254 unit tasks, as part of efforts to achieve the best quality of life in the country and reach a floating population of 200 million people.

Under ‘Well-Come Gangwon’, Gangwon will be developed into a main hub in the East Asian region, serving the role of a Eurasian network and becoming a global touristic spot.

‘Wonderful-Stay’ encapsulates the Gangwon government’s efforts to raise the local population by making the community more attractive, as it currently accounts for only 3 percent of the national population.

The Gangwon provincial government will revamp the region to attract investors, by hosting industrial complexes ready for the Fourth Industrial Revolution, while focusing on maintaining natural resources to create a sustainable ecosystem.

The provincial government is set to confirm the long-term vision after consulting a group of local government officials, experts, and local residents.

Gangwon Province began work to envision plans for 2040 last October, through over 70 meetings which were held in the presence of both experts and local residents.

“We will speed up the process of the projects by maintaining a close relationship with related government branches including city and county officials, so that problems can be solved more effectively,” said Song Seok-doo, a senior official at the Gangwon provincial government.